Home
Apps
Entertainment
The Chosen – Created outside of the Hollywood system 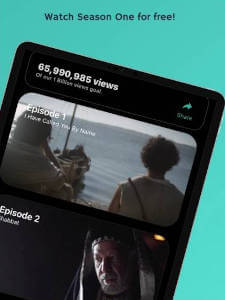 See the record-shattering series about Jesus that has a 9.9 on IMDb. Watch full episodes for free, stream on your iPhone or cast to your TV!

The Chosen is the first-ever multi-season TV show about the life of Jesus. Created outside of the Hollywood system, The Chosen allows us to see Him through the eyes of those who knew Him. No matter where you are in your journey with Jesus Christ, this TV show is for you.

MESSAGE FROM THE DIRECTOR

I’ve been a believer my whole life, I’ve attended Christian schools my whole life, and I’ve heard the stories of Jesus countless times. I’ve also seen every Jesus movie and miniseries ever made, and there have been dozens. So why a new TV show about Jesus?

Because I have a passion for people to hear the “old, old story” again … for the very first time. When I see Jesus movies, it’s sometimes hard for me to feel moved or excited. I’ve heard the stories before, and many Jesus projects just take you from Bible story to Bible story, not spending as much time on the humanity and backstories of all these characters. And they sometimes feel stiff and formal.

So when we started to write a show that explores Jesus through the eyes of those around Him, we were repeatedly moved and excited. We explored the backstories of Simon Peter, Matthew, Mary Magdalene, Nicodemus, and a few of Jesus’ miracle recipients, and in turn experienced Him in the way they did. We couldn’t help but identify with their recklessness, rough pasts, religious piety, and desperation for life change. And ultimately, their redemption.

One of our favorite responses from an early screening? “The story of Jesus that actually appealed to my teenagers!”

No matter where you’re at in your journey with Christ—whether you’re one of the many people in the gospels who encountered Jesus after a horrific past without Him, or you’re a Nicodemus who’s been a lifelong member of the God team—Jesus proved over and over that we have so much to learn and innumerable traits that need change.

We hope this show allows you to see Jesus as they did. The end of the trailer tells you how to watch this show right now.

I watched the first season marathon style while stuck at home after my son’s surgery. He would wander in the living room and end up staying a while, asking questions, laughing, and (here’s the kicker) not looking at his phone! The last 2 episodes he stayed for the entirety of the episodes. He asked questions that could only be answered by starting over – which we did! This gave us a wonderful opportunity to not just share the gospel story, but explore the humanity of Jesus, discuss the history of the time, and answer all of his questions about the “flash backs” to the Old Testament. My son doesn’t sit through ANY show – even major motion pictures unless we are at a movie theater. The fact that this series had him fully engaged to the point of asking questions and talking about it with me after is HUGE!! I am struck by how any license taken with the backstories or the characters personalities never veered from the biblical script – it just filled in the blank. I was expecting some deviation as we’ve seen so many times in Bible movies and mini series of the past. You only ENHANCED the biblical script and didn’t change it in any way. I am downloading the app to watch season 2. I am 100% behind you and this movement, and I am diligently praying God uses this to mount a spiritual revolution calling people to Christ and deepening the faith of believers everywhere. God bless you and the work of your hands!!

I’ve seen this multiple times over and I’ve been an advocate for it for months and months. It feels like pulling teeth to get people to watch it… but once they do! Support this project. Help others see Jesus through the eyes of those that followed Him. It’s not dry material, it’s incredibly deep and the character development is miraculous but not unbelievable. Director and creator Dallas Jenkins and team have done an incredible job at showing how God truly makes us new as He comes to us and as we get to know who He is. I’ve cried, I’ve laughed, I’ve been convicted, I’ve fallen in love, I’ve suffered, I’ve questioned, and through each episode, Jesus shines as an equalizer that turns everything for the good of those who love Him and are called (“Chosen”) for his purpose.

As an app, this is definitely unique. Since when do you find yourself not having to pay a subscription, wait through advertisements, create an account that requires your firstborn, or jump through a variety of multiple hoops? It gets cumbersome for people that haven’t seen it to convince them to download it. People act like it’s such a hassle. But it’s one not a single person I have convinced has regretted. And in all reality, it’s not any harder than downloading redundant apps like “Google.” Not to dog Alphabet/Google or anything…

Get The Chosen from App Store

What is your opinion about The Chosen