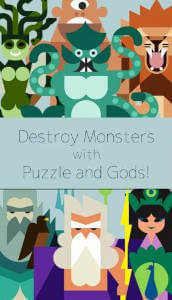 MUJO is a unique puzzle game with features that cannot be found in any other game. Let’s start collecting tiles and erase them all to attack monsters!

This game has no end! Enjoy whenever you want as much as you would like.

How to play
Stack three or more connected sword tiles by holding them down.
The more tiles you stack, the more offensive power you obtain!
Then, tap three or more swords after arranging them together. You can inflict damage to monsters and defeat them.
Destroy monsters from the Greek myths appearing one after another.

Add gods into your troop
A variety of gods from the Greek myths may appear out of treasure chests that come out once in a while! They can be your allies. Win through the battles against monsters while utilizing the various abilities of the gods.

Easy but profound game development.
A puzzle system that you have never experienced.
Many cool gods and monsters designed by HEY.
Beautiful but minimal graphic designs and animation.
Possible to compete with world-wide players and friends at GameCenter.

I really like this game, it gives you an unlimited amount of times to mess up! And it doesn’t make you have a limited amount of lives it’s pretty awesome! You can play it for hours and if you mess up oh well just press the up button!

I am a fan of matching games, and I initially thought this was going to be a fun game.

But it’s so boring. There is no real skill involved in the matching, especially when you can just pay money to buy “lightening.”

The animations that plays for a successful match are way to long and it plays every single one.

This is actually a fun game, when it lets you play. I would have gladly paid $1-3 for it. Unfortunately, like many games these days, this game uses the freemium template. It starts you out with plenty of lightning (energy) and you use these for special attacks and clearing blocks to save your high attack blocks. It’s not until 20+ levels in that these become essential. Once they are being used though they go quickly. By the time you get into the higher levels it is nearly impossible to beat them without using copious amounts of energy. And this is where they conveniently offer you the option to pay for more. I don’t play that game. Charge me for the game, not in-app energy.

I am deleting the app because I essentially only get one opportunity to beat a level each day with the amount of energy it awards you for your daily play.

If you like paying micro transactions for energy to play, then by all means please do. But I am tired of this being the model that people are using to make money off people that have addiction problems or don’t have the financial know-how to see that all the small payments add up and means they are paying upwards of $20+ to play a game with maybe a few dollars worth of content.

There is a lot to really like about this game. The minimalist graphics are excellent. The gameplay is a very interesting variation on match 3. The fact that you can’t lose a game at first was disconcerting to me, but I think it works very well here.

I like the variety of special powers that your gods have; these require lightning bolts to use which is the limited resource in the game. As best as I can tell, you are rewarded 5 additional bolts each day. The only other way to get these bolts is by in-app purchases. This is the fly in the ointment for me. While the game starts out easy, after a number of levels it becomes really challenging. If you aren’t using bolts to activate special powers, the game can be frustratingly hard. For a paid game, there should be a higher rate of earning new bolts without having to buy them.

Don’t Listen To The Negative Peeps

UPDATED: Had to drop 1 star in my review due to the bug that causes you to loose your current progress in a game when you try to get more lightning bolts via TapJoy. I had a Gold Chest finally created and a high score/win the game 13k attack cube ready to go and was only 2 lightning bolts away from both when I went to get more bolts from TapJoy only to return to a new game. Not good.

This game is pure brilliance!

Quit complaining and take the time to learn something, and stop expecting to have your hand held all the time. The game clearly doesn’t need a manual or instructions.

The game isn’t that expensive and you can get very far with no money at all with just a little patience and ability to understand the strategy of wining the game. They put a lot into this game and should be able to charge whatever they want. If you don’t like it, don’t play it. But just because you don’t like the cost doesn’t mean it’s a bad game.

1 Star Can’t Get It To Work People:

Just because you didn’t take the time to read the description that the game requires an Internet connection doesn’t mean the game is a 1 Star game, but it does say a lot about you.

Get Mujo from App Store

What is your opinion about Mujo

Pink – Each level has its own logic