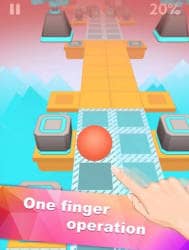 Stunn scenes with amazing 3D effects; one-touch operation, easy to use!
Swipe left and right to control the ball. Follow the music, dodge the obstacles, and conquer the world!

Wed love to hear your precious feedback and suggestions. Please contact us: rollingskyfeedback[at]conew.com

Business Cooperation:
Cheetah Mobile is now sincerely looking to cooperate with all the amazing mobile game developers globally and achieve mutual success! We are looking forward to your excellent games!
Contact us on: cheetahgames[at]cmcm.com

I love this game. I would say that in this category of gaming: touch sensetivity, memorization, and challenging gameplay, you are second to geometry dash, but that is only because of two things. The first thing isn’t that major. Robtop took the time to make their game have so much more gameplay. You make new levels all the time, which is great, but you have to watch a video, or use the keys to permanently unlock the level, which gets really annoying, because after you beat all the levels you can, there are so many more to play, but you can’t play them with out watching a video. In the 3.99 kit, I would replace that with the unlimited balls upgrade. Which brings me to the second problem.

One of, if not the main reason geometry dash is better than rolling sky is because you don’t have to wait, or watch a video after you run out of “balls.” In geometry dash, you get to play until you get bored, without having to wait for like three or four minutes to play again after losing 10 times.

So those are my two requests. 1) remove the unlimited balls as an add on purchase, so the people who want to get really good at the game, but don’t mind the adds can just keep practicing. Second, replace the unlimited balls add on purchase with a full access to every level. That’s all you need to do to get this game better than geometry dash. Other than those two problems, great game. Oh and do something about the lag.

I preferred it before the update

Hello, just your average 13 year old here. I came back to this game for a taste of nostalgia to see what has changed and well, a ton. This was legitimately my favorite game back then. I would play this all the time. I’m back here again, a while later to see that well… not so much is good anymore. It’s just not the same. And I get that some of the levels were removed. That’s disappointing. Also the fact that my favorite level, e-labyrinth, which I mastered and played all the time.m, randomly locked itself and it costed money to get it back. What the heck? I also wonder why. Just why. WHY does all of the new levels cost money? These levels used to be free! Even with the keys, i didn’t mind it. But now.. all of the levels cost money and it seems like you guys over at cheetah aren’t doing to swell. I also came back to this review section just to see a comment I was about to post about how much I loved this game years ago. I just wish.. the old rolling sky came back. I don’t like this game anymore because they ruined it in so many ways, and let down so many people, it’s ridiculous. I used to be a pro at the game until they added extremely hard levels I absolutely couldn’t beat. Somehow I did beat 3rd birthday and 4th birthday. Also one final thing, I noticed you guys haven’t updated in a while, and I see that well… the game must be coming to an end. And the other games too. And well, I just want to say… goodbye..

Get Rolling Sky from App Store

What is your opinion about Rolling Sky

OCO – Immerse yourself in the beautiful audio-visual world