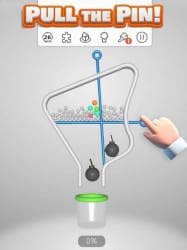 In this game full of satisfying graphics and innovative levels, you can challenge yourself, your brain, and your friends! It’s you against physics and the tricky levels — WHO WILL WIN?

All balls have to go into the pipe … can you remove the pins in the right order and make it happen?

It should be simple: gravity pulls the balls down towards the pipe. But then pins are in the way! Can you help out and flip away the pins and get the balls to where they are supposed to be?

But wait: there is another level of trickery! Sometimes some of the balls are colourless: before they go into the pipe, they need to touch a color ball, so the color spreads to them as well. So simple yet so tricky!

Over all, it’s pretty good.

This app could use a few changes. My Dad has this app on his Tablet and I was playing on his tablet and he’s like give it back. I said no and I’m like let me play for a few minutes. He said that I should get it on my own tablet so he downloaded it on my tablet. The app is really cool, but honestly here’s the thing. The app told us that the game was really tricky. I tried it and the levels were extremely easy. My Dad is on level, like approximately 400. I played on his tablet and it seems like when I play, the levels are even easier. I love how there’s like 90 percent game and 10 percent ads. On other games it gets us how it is completely the other way around. If you developers out there are reading this review, please just change this game by making the levels harder. Thank you for reading!

It’s not worth it

I’ve been playing and playing everyday every chance I get when I’m bored and it’s all the same. I’m wondering, does the game get harder? Are there any challenges?? I’m on level 1287 & it’s been the same crap since level 20. It just repeats itself over and over and over but the levels just keep counting up. I’ve watched over 20 hours full of ads on the last few months from this stupid game in between playing and I’m no just waiting for it to go to the next level of difficulty. Does it ever or is it all the same? Did the creators make a great game but got lazy halfway through and just have it restart itself but keep the levels going higher as you play? Like this game says I win each level but I feel like a loser thinking that this just a stupid game that keeps me playing because the creator made an endless game because they were too lazy to add any challenges, difficult puzzles, increasing difficulties of even anything different that Could add an increased joy of playing to this game. Jesus you guys are terrible. Just label this game for kids and then add a cap at like 1000 so they can feel a level of accomplishment for beating this garbage off a game.

It’s a game made to make you watch ads

This is what some might call a “relaxing”, where as I might tend toward the word “mindless”. There is little to no challenge to the regular levels, like four to six pins in the puzzle and literally the only way to lose is to not pull any pins at all, or the other more insidious way, which I will come to in just a minute. The other type of levels are “challenge levels” that become available after about every 25 or so regular levels beaten, and you pay with coins earned to open these levels and then you get ONE chance to beat that level, if you don’t succeed, you are then forced to watch a full ad to try it again. Here the insidious part that I mentioned earlier, the physics can be broken so that sometimes a ball will just miss the goal and you have to watch another ad to play the level again and hope it doesn’t just miss again, but it gets even worse, during the challenge levels sometimes a ball will just phase through a solid wall and fall and you don’t even know that you lost for another 15 to 20 seconds because its still falling or something? And it becomes a far too common event the further you get into the game. It’s almost as if its purposeful and not a bug to make you watch more ads. So if you love watching ads, boy is this the game for you!

I’m throwing in the towel

I liked this game for the first 1000 levels – it was neat to see how creative they designed the different levels, but after awhile, they begin to repeat. None is too hard, and that is nice for mindless playing, and admittedly there is something satisfying about watching these pieces drop into the beaker glass.

At first I liked building the city and seeing what comes next. But when the (costliest end) buildings begin to cost 232,000 then 500,000, then 1,000,000 tokens to build a house and the rent earned only increases 100 tokens, it will take a month of playing just to earn enough to build another lineup of buildings (I have 12 buildings, and it currently is 2mil tokens to upgrade all, next it will be close to 4mil).

It is no longer fun, but a chore. I’ll go to the cheapest end, max out the 20 building types, and call it good and delete the app.

I’ve become numb to the ads, but it just means I’ve been game-psychologically conditioned because when they don’t show (claims of No Internet – never true), I get upset because I can’t get bonus points or the rents. That is the sign that it’s time to dump this.

Get Pull the Pin from App Store

What is your opinion about Pull the Pin

Challenge Your Friends – Have fun with your friends

Sandwich – Are you a true sandwich master