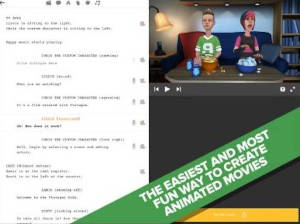 Want to try the easiest and most fun way to create animated movies ever invented? This is how easy it is:

1 Choose a scene
2 Create your own actors
3 Write your story and let Plotagon make it come to life
4 Save your masterpiece and share it with the world!

Please use #Plotagon when sharing. We’re always looking out for the next blockbuster!

Get Plotagon Story and experience this award-winning storytelling tool!

We literally TURN TEXT TO FILM!

Create yourself, a celebrity or your friends to act in your movie
Record your own voice, add sound effects and music
Share your story on YouTube and other social media apps

Plotagon is an award-winning storytelling tool for all ages. With this app, you essentially have an animation studio in the palm of your hand.
What’s on your mind?

For Plotagon Terms of Use please refer to: www.plotagon.com/legal/

This is good! But there are problems with the game…

So, I downloaded this game (probably a year ago) and it was okay but boring. And once you updated it, It was awsome! A lot of the voices are free for me but hopefully it doesn’t come back to price again, also, some voices still cost money but that’s okay. Anyways, there is some problems with Plotagon. 1 is the voice. Whenever I tried to put somebody a voice for them, my IPad just crashes. I tried to shut down my iPad and everything, but it wasn’t working. So do you mind of working on that a bit because it’s a issue. And when I put I little bit of English words in another language, like for example, typing English words to translate to another language. They just put an English voice. 2 is glitch. Whenever I put the character in the scene. They just disappear sometimes. 3 is the music and sound effects. Whenever I put a sound effect or music, they don’t play it. And you have to repeat the scene to make it work again. And 4, no more people in scenes. Just two people. And I’ve been wanting to put more people in a scene to make the video look better. One more thing, posting the video. I tried to post the video but I realized that I can’t. So what I did was record the whole video and edit it in KineMaster. I feel like I’m missing more problems in the game. Anyways, please fix the game or like update it with more stuff to make us happy and to have fun. Thank you for reading this! Finally I finished typing! Whew!

I really like Plotagon, but I wish that you could add more than two characters in a scene. It’s also a headache that you need to pay together more than one free English voice. If it were up to me, I would have at least five free voices that sound human for each gender and each language. The backgrounds are really slow when downloading, and EVERYTHING NEEDS BRONZE AND SILVER AND WHATEEVR. Do you people realize that HALF THE THINGS NEED MONEY!!! I HATE THAT! I know you developers enjoy watching money getting sucked into your bank accounts, but what about us users?

It would also be nice to add animals, ya know? Also when you do add them, don’t make the animals you hate look ugly and mean. And don’t add a million dogs and I dunno, one hermit crab? Not just the basic ones, like cat and dog. I’m talking aardvark to wolf. And why can’t the characters walk move anywhere? Why can’t we pick WHEREVER we want to put the characters? WE’VE GOT LEGS, PEOPLE!

Also, consider adding some props and let us USE the props.

I will be checking the app everyday for updates, and I will give it 4 stars for now. I speak for a lot Plotagons users, so developer, please consider. Thank you for reading.

Plotagon, this app is gold

I love this app. Honestly, I’ve had it for almost 3 years, since I was just about 8 and it was the best app ever to download! This is where I found my true self, comedic and creative movie making. I find this app both a hilariously and smart genre base maker. The only updates that really affected me was the most recent…some of my movies I made about a year ago have this bug where when you first open it, it just shows a bit of the first scene and then the rest takes FOREVER to load and taking most of the fading and extra effects away. I liked to make my movies fade out, and Plotagon helped me with their update about 2 years ago when they made the ‘/fadeoutb’ update and the ‘/slow’ or ‘/blur’ update. I’m just asking if you could take everything back from the OG plotagon, like the subtitles and the character creator that you could go to on the menu. This app is one of my possessions, very beloved and will always be. It is my childhood app and I would be hysterical if one day I got a notification from the App Store ‘cannot open Plotagon because it needs to update to the newest iOS’ and Plotagon was no longer on my home screen. Also, please update back to the normal store, it’s much easier to shop in than buying an expensive golden ticket with scenes and clothes all at once than buying a few cheap scenes, voices, or clothing/character packs. Please. Thank you, and I really mean it.

Get Plotagon Story from App Store

What is your opinion about Plotagon Story