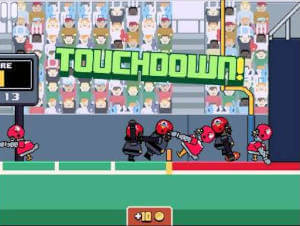 Touchdowners is a crazy physics based sports game where you need to grab the ball and touch it down in your opponents endzone!

You control a team of three highly trained Touchdowners. Pass, wrestle and jump your way to the end zone then slam the ball to the ground.

Play for glory in the career mode or top the global ranking table in arcade mode.

Go head to head with a friend on the same device in 2 player mode.

Can you become the greatest Touchdowner the universe has ever seen?

This game is very fun in arcade mode, you are not completely tortured with adds, and many teams that be easily unlocked.

Cons: there are not many NFL based teams, but they are still fun

Another thing is the game does not fill the full screen on my phone, causing me to miss the buttons

My favorite game on my phone

I don’t see a problem

Most free games have a huge problem, ie waaaay too much premium currency usage too many adds or frustrating/confusing gameplay. Surprisingly this game has none of it. Just a decent overall game!

Hope you make another

All of the games this creator has made are amazing but this one is by far the best. I definitely enjoyed this one the most out of them all. This game is enjoyable and hilarious. I would like to see a 2 player mode that pairs you up with a friend or random person on the internet to go against! Would be great if that could be added in!

All the other reviews say that the AI is cheating, and i agree. The AI never throws backwards, they always end up on top of you, and they fly to the end zone. The player has a 50/50 chance of a throw being successful, they just get thrown around by the AI, and their throws get intercepted instantly by the AI. Also, the AI can just smack the ball out of the air and it instantly darts to the end zone and there is always someone there. Long story short: you’re lucky you won a single game

Warning: Perfect for fun and raging

This is a fun game. Career mode the way to go though. Though they should add more mini games. It would be fun to control one player and play online with people. Or like a Oklahoma Drill. Plus it’s not one of those games that are super easy. Which leads to lots a raging obviously. Warned you.

This game is SO entertaining! I love watching the three stupid people playing around and doing flips like they are a gymnastics champion. I suggest this game to people that enjoy being silly and like games that don’t require much use of your brain.

I LOVE THIS GAME!!! You should get it if I haven’t convinced you already.

Get Touchdowners from App Store

What is your opinion about Touchdowners