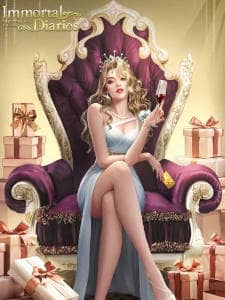 The day you decide to take life into your own hands, fate interferes. You leave the orphanage you grew up in to live in a grand castle that was left as your inheritance, learning shocking revelations about your true heritage. A mysterious family heirloom reveals that you are the descendent of the Progenitor of the vampire race. Enter an intriguing, complex world where thrilling romance awaits you, danger lurks around every corner, and the path to your rightful birthright as Queen of the Vampires is filled with twists and surprises. Can you awaken the power in your veins in order to become who you were always meant to be?

Supernatural Romantic Thriller
A modern day, coming-of-age story that will stun you with its interactivity, beautiful graphics, and talented voice acting.

Supernatural Lovers
Roleplay different kinds of love with our four male love interests. Go on dates, text message each other, and shower them with gifts! Which one will be your Mr. Right?

Diverse Customization
Dress up to become the most gorgeous girl in Rose City! Create your ideal character from hundreds of clothes, hairstyles, makeup and accessories.

Become Vampire Queen
Complete daily tasks to get promoted to Queen of the Vampires. Will you be ready to seize the throne when it’s time?

Followers for the Win
Cultivate the perfect dream team for dispatching problems in Rose City! Upgrade them to highlight their unique strengths.

Adorable Pets
Adopt a puppy and raise it to adulthood before helping it find a playmate!

Download the game now and join our growing community of players!

Give people a chance

The game is fun all around. However I don’t like the fact that the top people are the same people. Every. Single. Time.

I think what should be done is that after a week everything starts over and those players can’t participate after that for a few weeks because dang. I get tired of bowing or whatever. 2 people have all the slots for the high ups. That’s not right.

Please do something about this. I know I may never get up too and that’s fine, but come on. I am tired of seeing heart Nim something heart and the other one.

The game over all is good. The story is for the most part genuinely done, the animation isn’t obnoxious and the dress up portion is enjoyable and what I would hope for. It is still very much geared towards pay to advance and that’s why I’m giving 3 stars. It’s suppose to be a dress up based game but the “mall” aspect is really just a Russian roulette; there is no where I have found yet to just scroll through a few base collections of clothes you can buy with in game money. All of it is diamond based and passed out through lotteries paid for by gems. More gems better chances. For instance I’m trying to go on a date with one of the love interest and it requires winter clothes style. As I’m playing the game in the middle of summer/fall all the clothes given to me are one star mini skirts and crop tops. I don’t have the option to go to the mall and look for winter clothes so I can’t move forward with his date and this I can’t gain any more influence to pass the story missions. So now I’m stuck or I cough up $2-5 minimum to get the diamonds and perks to get the clothes I need. I’ll really did enjoy it and I hope it gets better soon. Not sure if I’ll delete it or just stop playing.

This is a vampire game where the main character is a vampire, yet the clothing items are so colorful & most of the hair colors are blonde, there’s not a lot of goth or vampiric clothing that would better suit a vampire & the only makeup with red eyes can only be unlocked with vip 13 which is only achieved by spending $200. Jeez, I’ve been playing this game since it launched but they really need to start listening to the reviews. I wouldn’t mind paying like $5 to $10 for fun gothic & vampire stuff but $200, are you kidding? Also once you’re past the first few chapters all the story line is just gone, & the game becomes really boring. After the first few chapters there is no voice acting, & then the story just stops completely with no development so you’re just fighting bosses endlessly with no story line whatsoever so it’s insanely repetitive & boring. Don’t get me wrong I’m still going to play this game cause I love vampires & it’s one of the only vampire game apps available but there are A LOT of improvements to be made.

Get Immortal Diaries from App Store

What is your opinion about Immortal Diaries

LifeAfter – There is a great story that awaits you

Natural Born Soldier – Push your adrenaline to the next level

Hello Neighbor – Hide-and-seek with your brother