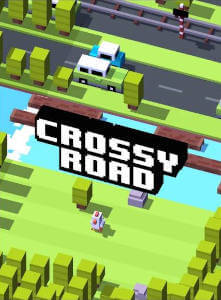 Why did the Chicken cross the road?

Why did the Pigeon leave THAT there?

Why did Unihorse eat all that candy?

This game is the great! The only thing is that you shouldn’t be able to get duplicates. I mean what do you even do with the extras?? It’s not a very big problem though. The only thing about it is that you waste 100 coins on something you already have, and if you want to try again you have to watch a video or spend more coins. I was actually surprised that there aren’t many ads at all. I like that you can get new characters for only 100 coins. Because in most games it would be a lot more than that. One time I got 2000 coins and bought 20 new characters. I like that there are daily challenges, so you can compete against other people without playing multiplayer. I don’t understand why the daily challenges end before the actual end of the day. Like I can play 2 different daily challenges in one day. I also like the variety of characters. Like, there’s pac man and ida. I like that there are different backgrounds when you play different characters. I know it sounds weird, but my favorite character is the toothbrush. I also like that the characters make sounds as they play. The baby animals sound like squeakers. It’s so cute. It’s honestly kind of sad seeing the baby animals get run over by cars, but it’s not real so it’s okay. So, the only problems (they’re not big problems) is that you can play two different daily challenges in one day, and that you can get duplicates when you try to buy new characters. Thank you for making such an amazing game!!!

This is the first game that I ever downloaded on my phone about 6 years ago, and I have been playing it ever since. I usually download mobile games and play them for a couple of weeks until I’m bored and delete them, but I have legitimately played this game for 6 straight years. I have actually become one of the top players on the game(top 1% on the leaderboard), and this proves that the game isn’t overly difficult. The characters give you a fun thing to do while trying to climb the leaderboard for highest score, and pecking order gives you an opportunity to participate in immediate competition. There is the complaint of getting to many duplicates, but I have collected every single character in the game without ever paying a dime of real money so it is possible. Anyway the only complaint that I have is that after you collect all the characters like I have, there is nothing left to do other than improve your high score(which is still very fun.) I would love to see a new feature where you can level of your characters even if it doesn’t improve their performance(just as a way to continue progressing) or maybe like unlockable decoration and costumes for each character. Overall it truly is the best mobile game of all time.

Get Crossy Road from App Store

What is your opinion about Crossy Road

Coloring Match – Match the colors by mixing them