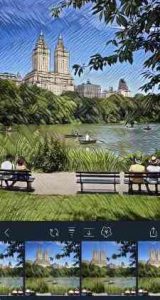 Create masterpieces at the tap of your finger.
Visionist harnesses the power of computer vision using neural networks to create original artwork based on your images!

App of the Week: Visionist Review – The most premium arty filters app we’ve seen – and one that provides more control than most. – Stuff Magazine, December 2018

Visionist is super easy to use. Just select an image, optionally compose your shot, then choose a style. For people that like options, don’t let the simplicity fool you; there is an infinite number of possibilities. Each style is available in three different levels of abstraction. The style can be blended with the original image in a variety of different ways, and the style strength can be adjusted from 0% to 100%.

Without any in-app purchases, Visionist includes 10 different, fully functional styles (each in 3 different levels of abstraction). If you would like more styles, an additional 60 styles are available for a one-time in-app purchase. Each style is a unique neural network trained to various artwork.

Live style previews
High-resolution output (4k resolution on modern devices, 3k on devices with A7 and A8 processors)
The free version includes 10 styles with full functionality
A one time In App purchase enables an additional 60 styles
Every style has three levels of abstraction to choose from
Each style is a neural network trained to different artwork
Additional features for images with depth data; can be used in combination:
Focal point adjustment
Selective Color by depth
Mix with original by depth
Spotlight by depth
Depth data is preserved in output, so the output works with Facebook’s 3D Photo feature
The strength of the style may be adjusted from 0% to 100%
The transfer mode of the stylized image composited with the original image has four options: Hard Light, Soft Light, Luminosity and Full
Styles can be mixed: the current result mixed with the next style chosen indefinitely; allows the creation of original new styles
Canvas prints may be ordered in the app
Easy to use yet offers infinite possibilities

It was obvious after spending just a few minutes with this app that I was totally in love with it. This app is going to replace more than a handful of other effect apps I am currently using, and in addition it adds a new depth and clarity to the processed images that does not exist with the other apps. I applaud the developer for going with a single purchase model. This is the first thing I look at when downloading apps. If a developer opts for the subscription model I’ll just pass on the app. In this case I tried the app, and within 5 minutes I purchased the BUY button and I feel great about my purchase. Keep the amazing photo apps coming!!!

Visionist has utility not found elsewhere on the App Store. The ability to create painterly effects to your photos, especially after unlocking the in app purchase, is second to none. The depth feature, which uses an iPhone’s portrait mode depth data as an additional map, opens up new creative avenues. But the app stops there. There’s so much potential to explore, like being able to apply different degrees of painterly effects (or color or focus or brush direction) using the depth channel, but the app leaves this unexplored. A glaring limitation is that when zoomed in, you can’t scroll whatsoever. This is an amazing version 1.0. Here’s hoping the development team will continue to explore its potential.

This with ComicBook! Is amazing!! It’s the perfect cartoon look for photos and then comicbook! Gives the perfect layout. My only wish would be if it was numbers on the effects tabs to be able to find the one I’m looking for faster when scrolling thru because it’s hard to find the effect I previously used because of no names on thumbnails. That’s the only important thing that’s needed.

Get Visionist from App Store

What is your opinion about Visionist

InShot – Add your own music to video

Enlight Photofox – Turn the ideas into brilliant art from your phone