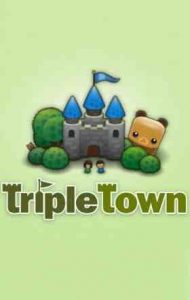 I had to force myself to quit playing Triple Town in order to write this review, which might give you some idea of just how addicting it is. – Gamezebo.com 5 star review.

Triple Town is an original puzzle game in which you try to grow the greatest possible city. The larger the city you build, the more points you score. You build your city by matching three or more game-pieces: combine three grasses to make a bush, three bushes to make a tree… until you’ve filled the board with houses, cathedrals and castles. Along the way, you’ll have to outwit giant bears who will try to block your progress.

How large can you grow your dream city before the board fills and the game ends?

Triple Town is free to play forever. Eventually, you will run out of moves, but they replenish for free if you wait a while, and you can also buy more moves with free coins that you earn in-game. If you want to eliminate the move counter altogether, there is a one-time fee for *lifetime* unlimited moves. It works on any compatible iOS device you own — just load the game’s option menu on your other devices and select “restore unlimited turns” to activate your purchase on additional devices. (Update: we’ve added a 2-minute mode that you can play free, forever, as much as you want, by watching advertisements in between play sessions. Or you can pay for unlimited turns, which disables the ads in this mode!)

I used to play this game when I was younger but I ended up stopping for a couple years. I was going through my past purchases and saw that this game was still available so i thought, “why not?”. I downloaded it, remembered why I loved this game, but played for a moderate amount of time.

then, i accidentally purchased unlimited turns and now…there’s no turning back.

i’ve started playing this game whenever i’m not busy/ on social media, and despite having 20 other games on my phone (i get bored easily), i find that i play this game the most. it’s addicting, and while ninja bears will always be my worst enemy, it is so satisfying to make bushes and mansions. it’s truly addicting and reminds me of my childhood. thanks to the creators for continuing to improve it as this is now one of my favorite apps to kill time on

Love this game BUT..

I want to start off by saying I LOVE THIS GAME. I’ve been playing it for years and it’s one of the only games that I haven’t stopped playing soon after starting. It’s very addicting. BUT there is a change that could be made to greatly improve the game and make even more people want to play it. I feel like there is no point to the game. I always start and then lose and have to re start all over again. You should add levels to the game where you can progress to the next level after getting so many points or achieving certain things on each map. Then there would be a ‘point’ to it and make me want to play a lot more than having to re start and re do it over and over for no reason.

Love the game, I’ve played it for a long time on my other device. I have noticed that main problem is that coins aren’t worth much in this game. I’ve made thousands of coins in 1 game but I’ve had to buy 200 turns multiple times per game and have had to stop because I’ve exhausted my the coins I just made. Not to mention I buy trees or bushes from the store. The approach would be fine at later levels of play if the coins were worth more.

I read a Dev Reply that the better players can make many coins in a single run, but those longer games take up coins to do and either it costs too many coins or you’re forced to play until you have no more coins. And have to wait hours to restock on coins. I’d write more but I’m sure no one is reading this… I’m just Venting. Good Game though, very addicting.

Get Triple Town from App Store

What is your opinion about Triple Town

HELI 100 – Get into your helicopter gunship