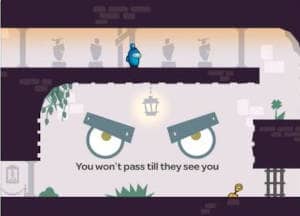 Escape from the castle, full of tricks and mysterious puzzles. This escape room game will challenge your ability to solve puzzles!

The Terrible Villain grabbed the Princess and set traps on the way to her rescue. A brave knight can save the princess hidden in the tower of the castle! Forward to adventure! Wander the mysterious corridors of the castle, solve puzzles, and avoid traps to find the faraway tower. There’ll be hundreds and hundreds of doors, spikes, platforms to jump on, and all this in order to find the treasured key. Take a close look at the room and read the clues (or riddles?) to figure out how to escape the room.

120 unique levels, packed with escape puzzles
unusual ways to escape the room
hundreds of doors you’ll have to open in your way to saving the princess

You won’t want to stop solving puzzles! Explore the castle that holds more tricks and secrets than it appears on the surface, and enjoy this fun puzzle game!

This game really gets your brain working! I was a little skeptical at first but after a while I was literally hooked! The graphics are great and the hidden stars are really fun to find! There were definitely a couple times where I was frustrated but the hints were always useful and usually all I needed was to look a little bit more carefully! Very fun game, definitely recommend!!

I was reading some of the other reviews that say the lock system every 10 levels is stupid and I honestly don’t relate to that AT ALL! The lock system, while sometimes frustrating cause it’s like a cliffhanger, gets me off my phone and spreads the game out. It makes sure that I’m not just playing the game for hours on end and to be honest I kind of like it that way! But some people don’t, I guess, so if you’re not into that sort of thing just be aware. But I still highly recommend. Also for a free game the ads really aren’t that bad. You don’t have to watch the entire ad, and it is entirely worth it. I also think it would be worth it for the premium pass if your willing to pay, I wasn’t and it turned out just fine!

Overall very well made game and just fun to play. I also love all the different costumesXD

Great game get it

First of all the adds this game is unlike others because it doesn’t have a lot of adds in it so it makes it really fun and the no adds aren’t too much to pay for anyways I don’t think you would need them anyways I’m a nine year old writing this review right now and I asked my dad to try this game and he absolutely loved it. This game has great quality and if the creator see’s this I would like and enjoy a part two of this game I also think that this kind of has a story to it that it will eventually continue into a series of games that get better each time and really famous as well like different YouTubers playing. I bet if some random person tried this game they would also right a great review because I personally think that this game deserves great ratings. Also this is a fact when I was doing the levels it reminded me of Harry Potter lol! I would really like to add more costumes to the game I got all of them in a few days but I think the designs are really creative and all in all it’s a great game please download it and enjoy playing your new amazing puzzle game.

I can’t wait for more levels and the ending! This game was wonderful it makes you think and it still super fun and interactive. I think the authors of this game put some real effort into this one and it shows! I would highly recommend playing this game and it seems the authors took pride in it too because you can play the whole thing for free. I beat every level and had a blast doing it.

There are some difficult levels but that just makes it better. All these apps these days are stupid easy so you beat them quick and watch more adds. While this game does have adds if your not willing to shell out $2 for the whole game!!! Like less than a gallon of gas guys, it doesn’t make you watch them all the time or every time you die. Just when you move on a level or need a hint. Seriously this game is so entertaining and just all around very well done. To the developers, amazing job guys your game is great please work on making some more!!!

Get Tricky Castle from App Store

What is your opinion about Tricky Castle

Pikmin Bloom – All through the simple act of walking