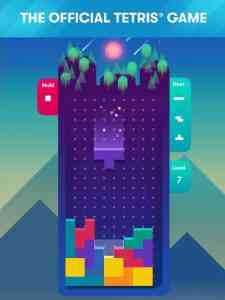 Welcome to TETRIS®, the official mobile app for the world’s favorite puzzle game.

Compete against thousands globally to earn money in exciting daily TETRIS PRIMETIME tournaments, hang out and chat with friends in private TETRIS TOGETHER matches, battle to be the last one standing in 100-player TETRIS ROYALE mode, play a quick round to beat your own score, or play infinite rounds to master your skills in the TETRIS Single Player Modes. TETRIS forever!

TETRIS PRIMETIME (eligible regions only*)
Play a real-time competitive tournament to win real money.
The longer you survive, the more prizes you’re eligible for.
Tune-in to the game show every night!

TETRIS ROYALE
Battle against 99 other players in last-one-standing matches.
Send attacks to other players and use combos to deliver knockout blows.
Climb the country and world leaderboards to prove you’re a true Tetris champion.

TETRIS TOGETHER
Invite friends to compete in your own private matches.
Customize the game to your group’s skill level.
Talk to each other while you play with real-time voice chat!

TETRIS SINGLE PLAYER
Master your skills with the iconic Tetris gameplay you know and love.
Pick between the Traditional mode for endless rounds or the new Quick Mode for when you want to play Tetris but only have a few minutes to play.
Rotate Tetriminos, clear lines and crush your high score.
Available offline – enjoy Tetris anytime, anywhere.

The world’s favorite block puzzle game is now a game for everyone to play together, anywhere. Tetris forever!

I come from the EA Tetris, like many others, and will likewise be comparing to that version. First off: this is a solid take on the game. I’ve already played this version a good bit, and am happy that it’s done as well as it is. I would recommend this app if someone asked. I echo what I’ve seen in other reviews though, particularly, the feeling of inconsistent controls. I occasionally feel the sting of a tetrimino locking into place far sooner than others. Buuut I will admit, as annoying as it is when that happens, I generally feel the controls are well implemented. So here are the two things I really wish were better: 1) the option of a larger UI and 2) more levels. There’s a lot of unused space on the screen on my phone, and yet the small UI makes it difficult to nimbly pause or switch a held tetrimino. I also get bored of the game stopping at level 15. I reach 15 pretty quickly, and I know there’s the high score, but that just doesn’t do it for me. On the EA version, I would usually start at level 16 and push to reach higher and higher levels. My failure was just as inevitable, but it was so much more thrilling to replay.

Like many people, I was pretty disappointed to see EA’s version of Tetris get taken down, however after coming across this game I’m pleasantly surprised to find that this is a great replacement. EA’s version was great, but was quite buggy, was full of micro transactions, and it also felt quite outdated. Playing this version of Tetris felt like a breath of fresh air. At the time of writing this review the game is still very early in its stages but there is a lot of potential here. There are multiple (free) themes to choose from and variety is always appreciated. However, a problem i run into often most with this version is the “next bar”. Without the colors of each individual piece appearing in the next bar to properly indicate the pieces, it makes it quite difficult to plan your actions. I find myself squinting at the next bar to try and make out which pieces are next while simultaneously controlling the falling piece. I do realize this could be an artistic choice by the developers for a minimalistic look depending on the theme, but perhaps an addition of an option to enable the colors would be appreciated. Overall I’m very happy with the way this game turned out and am excited for future content.

Get Tetris from App Store

What is your opinion about Tetris

Hello Kitty Friends – World with cute obstacles in your way