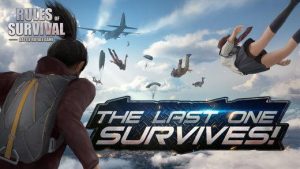 Welcome to the arena of RULES OF SURVIVAL!
You will be one out of 120 unarmed players who get air dropped into a vast, deserted island. Only the last one survives. it is not a game. You are writing RULES OF SURVIVAL!

Remember! Your safe zone is diminishing. You are racing against poison gas spreading, enemies shooting, and ultimately death chasing.
You could either fight alone or form a small team up to 4 players. Collect weapons scattered, arm yourself to the teeth, wield your wisdom and tactics, loot gear from the unlucky.
Alert !!! This is not just about a game. This is about a life & death fighting.

Run or Fight!
Absolute fair play in a massive HD map.
Last Man Stands!
Solo or team mode in a 120 survivor’s battle.
Pick and Use!
Variety of firearms and accessories.
Fast and Furious!
Drive vehicles across different terrains.

it is not a game. You are writing RULES OF SURVIVAL!

I’m gonna start off by saying that I really like this game. It’s so much fun to get into a game and play. However, there are a few things that I think would make the game better. This is probably the thing I don’t like the most and it that the circle is barely visible. I’ve been in games where I’m right on the line or I’m in the circle and I don’t see it coming because it’s so hard to see. I feel like for something that’s so important to the game it should be noticeable. Another thing that should be improved is the fact that when you die you just disintegrate and turn into a box. It’s not that big of a problem I just think it would be cooler that way. The last thing I don’t really like it the fact that it tell you where sounds are coming from. I get that if someone has their volume off they won’t be able to hear but I feel like it would be fun to try to figure out where it’s coming from on your own. The fact that it tells you means you know where everything around u is. This is all the stuff I don’t like but all I have left to say is praise. I don’t at all think it’s a bad game. It’s actually so much fun to play. Thanks!

Best Battle Royale game on a mobile device. Guns has variety with the many attachments you could add along with the scopes/sights. You can’t even use real life money to purchase anything in the game making it a fair game for everyone. The mics, walkie talkie, commands, text box and quick type makes the game very sociable along with adding as a friend option. Having a mic message on team and global chat is a great idea along with inviting fandoms from global chat into your squad. Footprint and driving alerts are another great idea for letting you know where people are without completely making the game dependent on sound. There are a lot of bugs and glitches in the game that would infuriate me but it IS a free game made by the Chinese. There are things to fix like the said so bugs and glitches, crashing, parachuting smoothness, rendering even with ultra on and buildings without loot in them. But overall I enjoy the game and would buy some merch from this game if they fixed all the problems.

Get Rules of Survival from App Store

What is your opinion about Rules of Survival

Rest In Pieces – Save all the poor souls