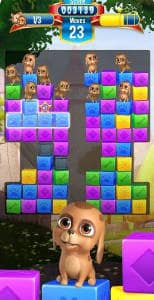 Match two or more blocks of the same color to clear the level and save the pets! It’s your job to create matches and free the pets, but remember – moves are limited so plan them carefully. Your puzzle skills will be tested with hours of cube matching fun!

Challenge yourself to this puzzling saga on your own, or play your friends to see who can get the best score!

Downloaded over 150 million times! – Thanks to all our fans

Pet Rescue Saga is completely free to play but some in-game items such as extra moves or lives will require payment. You can turn off the payment feature by disabling in-app purchases in your device’s settings.

Lovable pets of all varieties – puppies, pandas, piglets and many more!
Eye-catching graphics and colorful gameplay
Diamonds, exploding bombs, colorful paint pots, locked animal cages and much more
Spectacular boosters and bonus rewards unlocked after many levels
Easy and fun to play, challenging to master
Hundreds of pet puzzling levels – more added every 2 weeks!
Leaderboards to watch your friends and competitors!
Easily sync the game between devices and unlock full game features when connected to the Internet

Do not sell my data: King shares your personal information with advertising partners to personalize ads. Learn more at king.com/privacyPolicy. If you wish to exercise your Do Not Sell My Data rights, you can do so by contacting us via the in game help centre or by going to soporto.king.com/

Last but not least, a big THANK YOU goes out to everyone who has played Pet Rescue Saga!

This game is fun as well as challenging. It is also very cute ! Fun for all ages ! Try you’ll see, oh ! It is also addictive ! Enjoy I know I am. I have one suggestion for the game, ” when we win a level and have an activated booster it should be saved to our wheel of boosters ” because it is already ours. Thanks for the years of fun ! As of 2019 (added in later) I really wish your computerized app support did not interfere with my game playing and game winning. Also we as players would like to be able to at the very least be able to beat all the extra mountain levels some of the challenges. I have been playing since 2009, and have beaten the mountain challenge ” ONCE “. Yet I am addicted !// multiple reviews later – I still play daily. Yet I wish the computerized game interface would not interfere quite so much. Thank you.

I’m currently on level 525 and am running into the same two or three glitches over and over. 1) Most frequent is when I attempt to complete a side challenge (The weather ones or whatever), I can only get about half way through the levels. I can complete the level successfully multiple times, but the next level never unlocks. Frustrating but I have learned to just ignore those side quests. 2) However, there is another glitch which is much more rare (thank god) where one of the pets will disappear. Literally just glitch right out of existence. Words cannot describe how frustrating a level becomes because the glitch never happens on a level where I get more pets to make up for the missing one. 3) And for some reason between last night and this morning, my firecrackers are more powerful because previously they wouldn’t explode timed balloons yet now they do. Not the end of the world but definitely ruined the round I was playing when I first found out. Oh well.

Pet Saga is Enjoyable but…

Overall, I enjoy the game, I always have more than one city open so I have options to play if I get stuff on a hard level. That way I don’t get frustrated when stuff and have other options for play. Because some levels are extremely hard and take several tries to complete.

What is annoying is the piggy bank full of stars that I earned but which the game expects you to pay real money to release ! You win starts, fill the bank and then the bank pops up asking you to pay to release your stars and convert them into money.

I wish this would just go away!

So the game changed the rules, gets you used to earning gold bars and using them and now you can only buy them. Ugh !

What is your opinion about Pet Rescue Saga

Monument Valley 2 – Learn the secrets of the Sacred Geometry