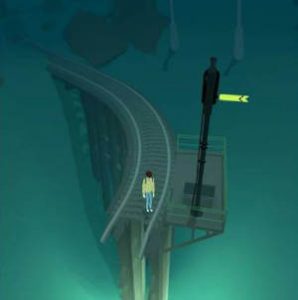 Lou, a young man in his early twenties, is on his daily commute in the train. He is soon after breath-taken by the sight of a young woman. Lou wishes to talk to her but his self-doubt holds him back. He is torn in two and gets lost in his inner world.

In this poetic art/adventure game you are in the pursuit of courage and try to mend your conflicting self. A journey through your subconscious world makes you deal with the fears and doubts that hinders you from talking to the stranger. Glimpses of your own courage leads you through dark forestry, dense fog and empty spaces where you are faced with the difficulties that prevents you from talking to the woman on the train.

LOST TRACKS was made by a team of 3rd year Character Animation & CG Art students at The Animation Workshop in Viborg, Denmark. Check out the individual student’s blogs at the links below to learn more about the talent behind the film!

Want to know more about The Animation Workshop?
www.animwork.dk/en/

I thought this was a really good game. I loved the story and everything that you had to do, as it was very puzzle like. I liked how you kinda had to use your senses, hearing, seeing, speaking. Also the music was amazing and for a lot of the parts made it very suspenseful. I really was engrossed into the game when I was playing it. The only thing I didn’t like were the controls to move the person. I thought they were very difficult as you had to hold down on the screen to move, but to turn you either had to move your finger on the screen for large movements or tilt your device. I think if it was holding down and moving your finger to move the person, that would make it a lot easier. Besides that, I thought it was a great game and I wish there was more of it. If the creators every could add more to the story that would be amazing.

Such a Lovely Experience

This game was downright lovely. The simple quality and art style of the models is pleasing to the eye, yet works so well in the small 3D environments we explore, and the sound design is by far the best I’ve ever witnessed in a mobile game. The different sections of the game worked well independently, and the simple UI giving you one single word to explain a new game mechanic was expertly implemented.

When applied individually, every section is a marvel on its own, but when received as a whole, it becomes a much fuller experience. The LOOK section showed me the importance of visuals, the LISTEN section helped me immerse myself in the excellent sound design, and the SPEAK section utilized a very interesting game mechanic. However, LOOK helped me pay attention to the visuals, or lack thereof, in LISTEN, and LISTEN helped me see the subtle nuances and changes in the orchestration or SPEAK. The game effortlessly and expertly utilizes its game mechanics to tell a story in a unique way, and was very charming while doing so. I would definitely recommend this to anyone looking for a quick, fun, and simple yet complex game.

A game unlike any other…

I am not one to review games, but I feel like this one deserves my attention.

When downloading this, I did not read the summary, I just dove right in, I was automatically stunned by the artwork and animation, along with every small detail. When my gameplay began, I started out very confused when watching the intro. At first, it seemed almost silly, but as I played along, I started to understand. I will admit, the controls were very unique and precise almost made me quit many times due to their oddity. I persevered, however, and I am glad I did. I could really feel the strong ominous tone that was set with the music, and I loved the interactions throughout the game. The three Categories were constantly used in their respected areas, and were subtle but important when it came to understanding. Overall, I was very engaged throughout my entire gameplay, and was very disappointed to find that I had reached the end so soon.

I do recommend headphones to their fullest extent, as they helped me both to understand and to complete this game.

This game is an absolute masterpiece! It stunned and gripped me with the simplistic, yet dedicated, art style and story line/plot. The story progresses and gets better throughout the game. In my opinion, the levels got better each time. Being split into three different senses, the levels seem to invest you into this world and shoot you out at least learning something. The music was absolutely amazing and the art style kept me playing for the, although short, gameplay. This is easily a five star rating and my only complaint is that it ended to soon. It was a total of 15 minutes of gameplay and then I was done. On the other hand, I understand why the creators stopped when they did, both the story and left-over senses would have not have made sense in the final draft. Being that the story ended in a wholesome and warm-hearted manner, and the left over senses would not be easily suited into the plot. Going along with this, the left over senses, touch and taste, almost left me thinking that was what is symbolized as love. Thank you for reading this review!

Get Lost Tracks from App Store

What is your opinion about Lost Tracks

Rick and Morty – Galaxy is back and better than ever