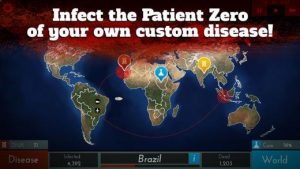 INFECT the world population with the most exciting DISEASE game on the App Store.
Spread your disease using different Symptoms and Resistances!!

Choose your Level: Easy, Medium or Hard
Select the country to start your disease attack
Evolve your disease and obtain dozens of transmission vehicles (Use Birds, Cattle, Water and much more)
Add Symptoms to increase lethality
Add Resistances to avoid being discovered
Download while it’s FREE!

If you don’t want to spend $1 on a “time killer” game, this is it. I’ve played Plague on someone else’s device before and this is very similar, almost identical. For a free game, it’s good quality.

If you’re hardcore about “being original” then go buy Plague. If you like the concept and want to kill time without spending, download this.

Just when I thought I had a surefire strategy to win every possible mode on the hard difficulty (and ready to delete the game), I’m surprised and lose, thus being forced to come up with a variation of strategies. Then, of course, I keep playing.

I have to say, Plague is definitely more challenging. It’s not easy per se, but it is easier to play Infection.

I got this game hoping to essentially get a free version of Plague Inc. That’s exactly what it is too, but when I lost and it was game over, I locked my phone. Later, when I wanted to call my friend, I opened my phone and it was on the “defeat” screen, so I went to press the home button so I could go call my friend, and the game popped up with a 99 cent in-app purchase to continue where I was defeated and it scanned my fingerprint rather than pressing the home button and it took my 99 cents and I cannot refund it. I deleted the game, all I want is a refund. I will change my review when I get a refund

to every one reading this down load the game right now I honestly dove this game so flipping much I played it 7 times by now and I pray that the game created makes another game as good as this also when I play the game I feel like a Evil mastermind from an old cartoon destroying the world. So to sum it up I think this game is so freakin addictive!!!!!!!!!……….. get it right NOWWWWWW!!!!

What is your opinion about Infection Bio War