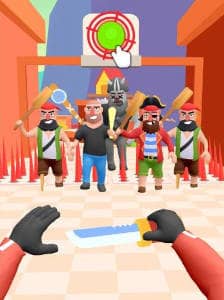 It’s time to get the knives out!

Do you like action spy movies? Do you like to silently defeat rivals? Then challenge yourself in an epic Hit Master 3D game! Here you must prove that you are the best and most accurate spy of all! Once you’re ambushed, you are attacked by a huge crowd of enemies, and all you have is a lot of knives! Throw knives, defeat rivals one by one and beat ‘em all to survive!

The game has a lot of interactive items. If you don’t like to defeat enemies one by one silently and slowly, you can throw a knife into an exploding barrel, and defeat a crowd of enemies in one blow! Also, there are various boxes scattered everywhere – break them to slow down your enemies!

What is more, you will save hostages on your way to win! Save everyone and get to the helicopter – become the ultimate hero!

Remember, there are many enemies, all of different sizes, and they won’t attack alone in a polite manner – they attack at once! Each of them is armed with baseball bats or huge spanners! But it’s not a problem for you, right? It will hardly scare the best secret agent!

Hit Master 3D is a completely free game! So what are you waiting for? The world needs you, agent! Download now and start your adventure!

Good game wish there was more

A while back I got the game and really enjoyed it! But a week in there wasn’t any content left but I still played from time to time this week I came back to find the boss mechanic and really liked it but I think the bosses should be harder and for a boss suggestion I think it would be cool if there was a giant spider and you would have to hit all of the legs then you finish is of with a rocket launcher. So yeah it is a really good game with a GREAT concept I highly recommend getting this game!!!

Okay, I have a ton of fun wasting my time playing this game. The graphics and response times are put together very well and I have been finding new challenges as I’ve played. I couldn’t give a full 5 stars though and my reason for withholding one is because the game doesn’t really progress in any way. It doesn’t offer increased levels of difficulty regardles of how many games are played. The scoring protocol is driving me nuts because there are no clear reasons or logical justification as to why points are awarded. The problem with games like this is that the player gets bored with it after awhile. Without any increase of challenge as one progresses, even a game with good graphics like Hit Master 3D becomes boring after awhile and will ultimately get deleted or forgotten by most. Fix that issue and I will gladly edit my review to include 5 stars.

Hello there! Thank you so much for the objective criticism. Our dev team will take it into account while preparing next updates of the knife throwing and make the 3d game even better. Stay tuned for the updates!

Fun trying to kill enemies in the background before the ones in front of you or when jumping …only real skill to this game. This is no sense of danger. Hit a tnt and blow up everyone around you… except you and the hostage?!? Maybe make some of the enemies go toward the hostage or put a time limit between areas. Also no point in starting each level on having to hit the bad guys before they start moving after level 2 we get it… you have to hit them. Also maybe have them start closer to you so there’s another speed factor to it. Otherwise it’s fun. Hope you take this advice cause I think it could become a solid game if there was skill and danger involved.

Hello! Our team is constantly working on fixing and improving the game with knife throwing and the players’ feedback helps us a lot. We’ll take your suggestions into account while preparing our next updates of the 3d game. Stay tuned! Thank you so much.

This is very accurate (not like I tried it in real life) but it’s very fun to play. Honestly people should stop complaining about the ads because airplane mode fixes that lol. I would definitely recommend to those who like game that involve being a spy and knocking out (killing) bad guys. Don’t listen to the people who say the game is pointless because it’s NOT. Keep up the good work!

Have a nice day! Our dev team is so happy you like this assassinn game. Your opinion is important, as it helps us to improve the app with knife throwing. Thank you for the feedback!

What is your opinion about Hit Master 3D

PK XD – Build the game with us