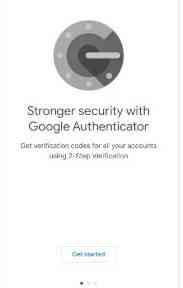 Google Authenticator works with 2-Step Verification for your Google Account to provide an additional layer of security when signing in.

To use Google Authenticator with Google, you need to enable 2-Step Verification on your Google Account. Visit https://www.google.com/2step to get started.

Essential App, But No Cloud Backup

This is one of the most essential apps on my phone. I don’t know why I trust Google with my 2FA codes (I don’t really) but this is a very useful and important app. It is pretty basic as far as apps go, but it works for the intended purpose.

They just added the ability to transfer 2FA codes when upgrading to a new phone. They released this feature less than a month after the second wave of new iPhones came out… so less than a month ago I did the transfer manually, turning 2FA off and back on for my new phone across a dozen services. Some were easy to transfer, others were the opposite. It took over an hour. Their timing with this feature is awful, but at least it’s here now I suppose.

Is this the update we’ve been waiting for?

I saw with the most recent update Google added the feature to move accounts to a new device. Previously the Authenticator app only moved Google accounts so if it now moves all accounts that are stored in the Authenticator app that would make this app 100% more useful. I only change devices every few years so I’ll need to wait to confirm but this appears to be a major update with a feature that people have wanted for a very long time

I just wanted to say Thank you for finally putting a export accounts option to move from device to device cause this was always my more preferred app but due to lack of exporting accounts couldn’t take the risk so I’ve been using the Microsoft version. I did like how there was a Apple Watch version although It was never really that useful anyway. But I hope maybe there might be a Apple Watch version of this someday if not that’s fine then. Please always keep improving this app.

It’s alright… but they listened to my feedback and improved!

The app doesn’t explain many of its features well and has noticeably less features than the versions on other phones. I sent a detailed feedback message about important features that were missing, and a few weeks later all the features I mentioned were either improved upon or added! It makes me happy that my input was listened to!

Previous version crashed on launch, I lost the use of the authenticator for about 3 days.

The latest version works great and the new look is pleasing. Thanks for the dark mode

Great to be able to export now!

Fantastic, and works perfect! I agree with other users that cloud backup would make this perfect. But now that I can switch to my new device, awesome!!!

Crashes when I start

Normally this app works fine, but it seems like there was a recent update that broke it. Whenever I start the app, it just shows the Authenticator logo and then crashes and takes me back to the start screen. I tried restarting my phone and it didn’t fix it. I’m afraid to re-install in case I lose my accounts.

Decent app, but I would like to see features such as touch ID, pin access and cloud back up like the premium authenticator I pay for with my other applications.

Get Google Authenticator from App Store

What is your opinion about Google Authenticator

PCalc – An extensive set of unit conversions and constants

Flashlight O – Giving you the direction in the darkness