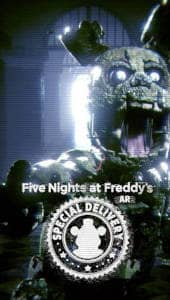 Five Nights at Freddy’s AR: Special Delivery is the next terrifying installment in the FNAF franchise. Players will confront malfunctioning animatronics in their real world and attempt to survive these horrors come to life. Through the game, players subscribe to Fazbear Entertainment’s brand new “Fazbear Funtime Service” and get their favorite animatronics on-demand. Due to unfortunate circumstances, the visiting animatronics malfunction and attack subscribers instead of entertaining them.

Players must confront an endless stream of hostile animatronics that will follow them wherever they go. The question is, how long can players survive? And just what is happening at Fazbear Entertainment?

EXPERIENCE real-time location based gameplay, where FNAF animatronics will pay you a visit wherever you are and wherever you go

COLLECT parts, CPUs, and plushsuits to ASSEMBLE, test, repair and deploy your own hotwired animatronics, and search & collect remnant in your environment

SEND ANIMATRONICS against your friends and other players, and get the highest spot on the leaderboard

Additional Notes:
Please note that FNAF AR: Special Delivery is free to download and play, but offers some game items for purchase with real money. If you don’t want to use this feature, please disable in-app purchases.

Compatibility:
Compatibility is not guaranteed for devices without GPS capabilities or devices that are connected only to Wi-Fi networks.

Great game! Needs some work tho

This game is absolutely amazing! I downloaded it the day it came out, and I still play it almost every day. The models are amazing, it’s challenging and fun at the same time, and with new skins/characters every week, the game is never low on content. However, there are a couple bugs and things that are kind of annoying. 1: sometimes when I load up the game, it’ll get stuck at 85%. I usually just have to wait 30 seconds and it’ll resume, but it is kinda time consuming. 2: I don’t get why the packs in this game are so expensive. It’s like saying that if a pay 42$ ( yes, that’s the in-game price for the toy chica pack) then I get to look at toy chica, and fight her three times. I get that since this a mobile game, there will be in-app purchases, but these are just not worth it. I recommend completing the daily challenges to get lures, and who knows, maybe you’ll get toy chica for free. That’s how I do it! And finally 3: the lack of characters. I get that it’s hard to make up mechanics, and model things, and I just said how this game was never dry on content, but there comes a point where people aren’t gonna want to fight the same character Over and over, with the only difference being that they look different. The last character to come out was golden freddy, and he was cool and all, but he came out in December! Hopefully the new DLC gives us new characters. If so, I’ll change this to five stars

Thank you so much for your feedback and comments–we are always looking for ways to improve the app and the in-game experience!

Get Five Nights at Freddy from App Store

What is your opinion about Five Nights at Freddy