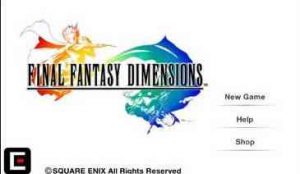 In addition to enhanced graphics and sound, this smartphone version also marks the title’s overseas debut.
Drawing upon the roots of the series with such features as beautiful 2-D pixel art, a battle system involving job change-based character growth and ability combinations, and a classic story of light, darkness, and crystals, FINAL FANTASY DIMENSIONS delivers the best of FINAL FANTASY, retro and fresh alike, directly to you.

We hope you enjoy this wonderful new addition to the venerable FINAL FANTASY series.

The game’s prologue–the first arc in the story–is available for you to enjoy as a free download.
Subsequent chapters are available for purchase via the shop menu.

You can also switch background music from the game using Chiptune Arrange functionality!

Chiptune Arrange is also available for purchase in the shop. Just select “Chiptune BGM”!
If you’re not convinced, try arranging serveral background songs in Chiptune before you buy! Just Select “Arrange” from the “BGM Type” option in the Config menu! It’s that easy!

Due to the use of a universal aspect ratio, portions of the game screen may appear black on some devices.

I adore this game as far as I have played, one of my all-time favorites. As a matter of fact, I’ve played the prologue at least five times over the last few years. The pixel art is beautiful, and there is a good balance of both storyline dialogue and gameplay. Also, the music never seems to get old.

I have only one problem, and it’s pretty big. The reason I’ve only ever played the prologue is because when I attempt to purchase the full game, I can only manage to get to the Apple ID confirmation. Afterwards, when a game would usually accept the purchase, the game claims there is a “communication error.” It doesn’t take the money because of this though, thank goodness. I researched the problem and found others have had very similar issues. No one has been able to access the full game unless they download it on another platform.

Considering this has been overlooked since the last update five years ago, it is unlikely anyone will get the message, but I’m sending it anyways, just in case.

If this was read, thank you for your time. Wether you have the resources to act upon this issue or not.

FFD is a great game in the series. It has vibrant colors, great story, fun characters, classic battles, and the rest of the great tropes that final fantasy is known. Now however, it suffers from the same flaws that many FF games on IOS suffer as well. To name them would not do those who found them any justice because their voices have have fallen on deaf ears for months and even years. All one has to do is read the previous comments of most of the mainline FF games and the issues will be laid bare. I will again write my concern within these archives of praise and concern but this time another game joins the fold of past problems. FFD was a full screen game and now the resolution has been reduced. This games joins FF1, FF2, FF5, FF6, FF7, and FF9 insomuch as this is a persistent problem that has not been resolved or even addressed for a long time. I again ask what I asked on the July 2020 update of FF7. Square, do you read these reviews? Do you respond to your customers praise and concerns? Do you care?

This is by far the best Final Fantasy RPG mobile game if you are a fan of the classic nes/snes games. The story is gets a little predictable as you progress through the game but the characters are entertaining and you have all the classic elements such as job classes, spells, weapons and lots to explore. One feature which I️ absolutely love is the “auto battle” which speeds up the battle sequence for your random encounters. It makes grinding and leveling up so much less painful. The one negative thing I️ have to say is that the game takes over and does way too much “talking” and cut scenes for the story progression. Sometimes I️ just want to keep battling and moving forward and instead there’s 10 mins of talking and character interaction. Once it’s over and you move on to the next cave or castle it takes over again. Other than that this game is great and I play it about once per year since it’s so much fun.

What is your opinion about Final Fantasy Dimensions

Hide N Seek – Try to be kind though