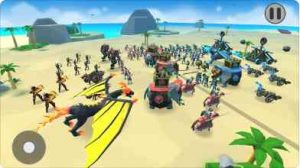 Form your strategies, choose your troops and place them wisely on the battlefield and beat every opponent !
Play against levels, custom and real-time multiplayer !

You can now totally improve your army, watch ragdoll effects and play multiplayer mode, created just for you with advanced matchmaking algorithms.
With the improved graphics and the enhanced intelligence of the bots, you can now experience ultimate battle simulations !
Game Features :
Ragdoll and physics effects !
Advanced army placement !
Army upgrade up to three levels, with awesome gear and stats improvements !
Advanced multiplayer ranking system for better matchmaking and custom leader-board !
Well-made, improved graphics to make the battle cooler that ever !
Smarter troops to achieve the most accurate battle simulation !
Awesome sounds and music variety !

New troops added every week! Got a suggestion? Send us a message and maybe the new troop will be yours!!

VIP Membership offers a weekly subscription, you will have a 3-days FREE trail period, after this period you will be charged for $7.99.

This price is established for United States customers. Pricing in other countries may vary and actual charges may be converted to your local currency depending on the country of residence.

Payment will be charged to iTunes Account at confirmation of purchase.
Subscription automatically renews unless auto-renew is turned off at least 24 – hours before the end of the current period.
Account will be charged for renewal within 24 – hours prior to the end of the current period, and identify the cost of the renewal.
Subscriptions may be managed by the user and auto – renewal may be turned off by going to the user’s Account Settings after purchase.
Any unused portion of a free trial period, if offered, will be forfeited when the user purchases a subscription to that publication, where applicable.

What is your opinion about Epic Battle Simulator 2

Might and Magic Elemental Guardians – Journey through enchanted lands