Home
Games
Racing
Data Wing – Own courses and the leaderboards 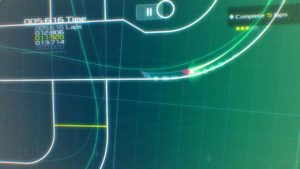 Blast through a stylish, neon landscape in this story-driven, racing adventure.

Data Wings deliver critical data throughout the computer system, following Mother’s orders without question. But when the system comes under attack, and Mother becomes irrational, something must be done!

Intuitive two-touch controls with an arcade feel
Sleek racing with a focus on thrusting off walls
A +2 hour story with over 40 levels
A competitive crown system. Own courses and the leaderboards!
An amazing soundtrack from world-class producers. Featuring: luxury elite, 18 Carat Affair, ESPRIT 空想, t e l e p a t h テレパシー能力者, Eyeliner and NxxxxxS

DATA WING is the solo passion-project of Dan Vogt; a 15-year veteran of the games industry.

Love it. Great gameplay, boosting off of walls is ssssooooooooo fun. I agree with the others definitely needs more content, maybe like you could get different looking wings, could change the look of the wings and color trail. Maybe add an endless mode, where the track is randomly generated, though I don’t know how well that would work out xD.

Of course multiplayer would be cool I guess, though I’m not really someone who would be playing that to often xD.

Back to that endless idea, maybe there was a digital world that you could explore and you could like go through the files of apps or something that would be cool too. But most of all BE CARFUL xD. I’ve seen so many games/apps with so much potential ruined by the developers because of numerous reasons. For example, This one app that I love was ruined by 1 person who’s phone was old and slow so whenever they tried to run it it crashed, so they went and put up a review saying the game kept crashing and what did the devs do? They removed a key feature that set this app apart in an attempt to make the game run better. ITS YOUR PHONES PEOPLE. NOT THE APP. Anyway xD. Think long and hard about what you put into the game (or take out ) before you do.

PS. Fellow reviewers, please help me spread awareness that phones can get worn out just like everything else xD. Just because an app is running slow doesn’t mean it’s that apps fault, it’s probably just because your phone is turning into a potato xD.

Possibly the best storyline I have ever seen in a mobile game, let alone a free one. The limited-perspective, data-driven take on a heart-wrenching narrative, combined with the antics of Mother and Rogue, playful jabs at the freemium paradigm, and excellent overall pacing and flow had me on an emotional rollercoaster as I played through the story. Maybe it’s just because I’m up late, but I really felt for the characters at times, and I can’t help but wonder if some of the “real world” narrative is based on real life. I could go on and on about how good the gameplay is as well, but the story is what got to me the most.

Get Data Wing from Play Store

What is your opinion about Data Wing

Big Win Racing – Get ready to burn some rubber