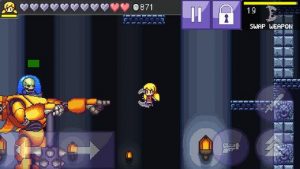 Its time for the epic conclusion to Cally’s battle with the Nefarious Herbert! Cally’s parents have been kidnapped again, as Herbert tries to take control of the Caves to perform his evil experiments.

Join Cally in this action-packed run and gun platformer, conquering insane bosses, exploring to find secrets, and levelling up EVERYTHING. Use your weapons to level them up and evolve them into their ultimate forms! Unlock new character abilities like the Triple Jump, Dodge Roll and Water Wings. Use a new playable character, Bera to unleash crazy ninja moves and solve puzzles.

Most importantly, battle to rescue your parents from Herbert’s clutches, and bring an end to Herbert’s experiments for good!

120 levels across 8 zones
intense boss fights against giant monsters
New playable character Bera
battle against 20 types of enemies
New Game + mode which unlocks higher weapon tiers and a second ending
Wave-based Survival mode: Can you beat 150 waves of deadly enemies and gain the ultimate prize?
Level your weapons up by using them, and evolve them into different forms with different effects
12 weapons classes with 89 unique weapon effects
buy consumables from the store to use them later for an extra boost
tons of character abilities to unlock
new weapon mod system, allowing you to customize your favorite weapon and make it extra powerful!

It’s time to battle for your parents freedom, to protect the Caves’ animals and natural resources, and most importantly, to SAVE YOUR PARENTS!

Hello there! I absolutely love this game and finished the first gamemode as well as Melvin’s prototype and Bera’s zone. I ran out of things to do and decided to purchase the New Game Plus. However, my attempt at entering the gamemode failed and it sent me to the purchase screen. I tried purchasing again and it claimed that the product has been purchased. The money has been taken from my father’s account yet the gamemode was still unavailable. I even went through the last boss and Melvin’s prototype again yet the gamemode was still unavailable. Please explain this issue

As the title said, this is one of the greatest game I played from App Store , the problem is that I receive ads once every 4 map change, include death and going in and out of a map accidentally, if this can be changed or slightly altered that would be great

If I could give it 9 stars I would 5 just doesn’t give this game series enough credit. Well done whoever made this games. I can’t believe they are free. Thumbs up lads and lasses

Get Callys Caves 3 from App Store

What is your opinion about Callys Caves 3

Deploy and Destroy – Dive into the secret underworld of John Wick