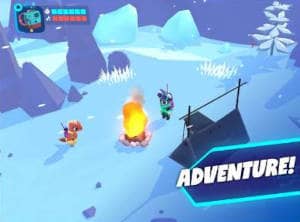 Battle your way through an Epic Open World RPG from the makers of Rodeo Stampede!

Botworld is a huge, beautiful and diverse world which you can explore as you venture out to collect rare scrap and discover new bots. Enter new environments, meet a variety of characters, collect rare treasures and uncover the many secrets hidden in Botworld. You can freely explore the many lush forests and arid deserts but make sure you have a strong team of bots because you never know what’s around the corner!

Outsmart your foes in a unique strategic battle system. Your bots will leap, charge, stun or blast around the arena using advanced AI while you pick the perfect abilities to stomp your foes. Each bot has unique abilities and a powerful ultimate, combine these with your favourite player abilities for maximum effect.

You will discover, build and collect rare and powerful bots to create the ultimate team. Search the world to discover new bot recipes and collect rare scrap to build and upgrade your favourites. Customise their powers and abilities as they level up and get stronger.

Play as one of 4 species: cats, dogs, buffalo and lizards. Choose a unique look to add your own personality to the character.

As you move on to other maps, which I’m on the third one “falling grove” the difficulty increases. Buffalo enemies can travel further distances and the overall detective range of the enemies increase quite drastically. Also the dog enemies with higher movement speed need some balancing. I’m not sure how the devs envision the game to be, but I have this casual feeling toward the game. Everything starting from map three just start losing this casual sense and going towards the annoying/unreasonable regions for the players. And the chests, they run so fast I thought they were Olympic athletes, seriously.

I Played for a week to check the game out. I definitely would like to support the game, but the pricing just doesn’t make me feel like it. I got the starter value pack for 3 days I think to reduce the cost of the pass by half. 3 days is hardly enough time for anyone to actually decide whether or not it’s nice to throw in some money. I was about to buy the pass before I realized the discount was gone, that was unfortunate. 6.99 or 7.99 might allow players to be more willing to spend some money.

I want to ramble the good parts but that’s just repetitive.

Don’t listen to the negative people leaving reviews. This is a great game, that’s only slightly gotcha. If someone complains that the fighting is boring, that’s because they haven’t played long enough. The further you get, the more dynamic it gets. You need a controller to play, the controls are easy and fluid enough.

My only complaint, if any, is that the difficulty does ramp up steeply at one point (that I know of so far). Can we raise the level cap for the bots that is determined by the level of your boat? Level 10 doesn’t allow us to be very competitive in the final quests in the great desert area. It like hitting a brick wall, and then you can only do the frozen area once a day. You guys are actually doing yourselves a disservice with this particular mechanic, because it reduces our play time significantly…

Having launched just a month ago, this game is really well done and addicting. The mechanics are easy to learn and challenge you the farther you get. I understand with a game like this, the devs need to make some money to improve the game and keep it fun. I do think however that the cost of certain things are a bit high. For example, the mayoral membership should be no more than $4.99 yet comes out to $9.99 for the 170 gems. Buying epic bot frames/epic boosters is also $9.99. Maybe make some of the in app purchases a bit cheaper and more reasonable, and the profit revenues will increase! Other than that, the game is very well done and has lots of opportunities to get even better. Great work!

Get Botworld Adventure from App Store

What is your opinion about Botworld Adventure