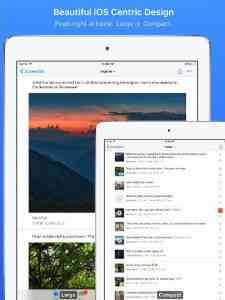 Simply remarkable, […] you’re nuts if you don’t try Apollo. – John Gruber, Daring Fireball
The best Reddit app for iOS – The Sweet Setup
Apollo is the best Reddit client I have ever used. Period. – iMore
Apollo makes the wild world of Reddit more accessible than ever before, and it may just be the best designed social feed app I’ve ever used. – MacStories
Apollo is the only Reddit app you need. – TechCrunch
Beautiful, modern, and fast. – MacRumors

Apollo is a beautiful Reddit app built for fast navigation with an incredibly powerful set of features. Thanks to features like the Jump Bar, fully customizable gestures, and a super-charged Media Viewer, browsing Reddit has never been this amazing.

It’s created specifically with iOS design guidelines in mind, so it fits right at home on your device, and with input from thousands of Redditors helping sculpt and perfect it over several years before launching:

Jump Bar, for super-fast hopping between subreddits
Super-charged Media Viewer for an amazing experience viewing images, GIFs, videos, albums , and more from a variety of sources.
Tabbed interface for easy navigating
Incredibly powerful Markdown composer for writing comments and posts
Full inline Imgur uploading, both images and albums
Large or compact posts depending on your preference
Dark mode (can be automatic)
Fully customizable gestures
Safari View Controller for browsing articles and links
Inline previews of media in comments
3D Touch support
Beautifully organized Inbox
Filtering and blocking
Face ID / Touch ID / Passcode lock
Moderator features
Tons of settings to tweak
GIF scrubbing to go backward and forward in time
Multiple accounts
Powerful search
Full Markdown rendering
Unobtrusive Volume Indicator
As well as much, much more and it’s constantly evolving. If you have anything you’d specifically like to see, come to the ApolloApp subreddit and we’d love to hear it!

This app offers subscriptions for “Apollo Ultra”. They’re available (in United States pricing) for $0.99 monthly or $9.99 yearly. Subscriptions will automatically renew unless auto-renew is turned off at least 24 hours before the end of the current period (and charged to your iTunes account). You can turn off auto-renew/manage subscriptions in your iTunes Account Settings after purchase. Terms of Use can be found at apolloapp.io/terms and Privacy Policy can be found at apolloapp.io/privacy

Apollo is an unofficial app, and side effects may include an incredible browsing experience.

Apollo is by far the most-used app on my phone (and now I have the ScreenTime reports to prove it). It is orders of magnitude better than the “official” reddit app and is superior in every way. It is fast and smooth and packed with features. I especially love that I can pick the theme I want, change the icon, and remove ads! The thing I hated most about the official app was the ads that were disguised as legitimate posts and with Apollo that’s all gone!

I bought the Pro upgrade months ago to gain access to additional features and it was one of the few in-app purchases I have never regretted or felt like wasn’t worth the cost. Today the developer released an update adding a bunch of new features that require a very reasonable (seems underpriced to be honest) monthly subscription, and like a true bro he has the option to unlock it for life with a onetime purchase! I hate monthly and even yearly subscriptions so I especially appreciated this option.

All that by itself should convince you that this app is worth it, but the thing that really seals the deal is the developer. He is amazing. Super active with feedback and very open in his communication about the status of the app’s development and requested features.

I first got Apollo because of r/iossettups, which almost unanimously said that Apollo is the best reddit app. I went out on a limb and downloaded it, and at first I thought it was trash. However, I tried to give it a chance, and after about two weeks I couldn’t go back to the default app. I don’t usually buy apps, but I decided to make an exception and used one of my gift cards to try Apollo pro. And oh my god, it was an amazing decision. I felt like I had achieved enlightenment, that I had found the one true reddit app. But I wasn’t done yet. I wasn’t in to subscriptions, but this was right around the time I helped start up r/simfascism, and I felt like I really needed notifications. So, I whipped out my gift cards, and ten minutes later, I had purchased Apollo ultra lifetime. It was beautiful, it felt like I was gazing upon a god. Then I stopped using reddit for a while, but once r/nosleep popped up on my radar, I came back. At this current moment I use Apollo mainly to browse text based subreddits, and have become a lurker. However, I must say that Apollo looks and feels like the most well integrated iOS app I’ve seen. Honestly, I could mistake its design for that of a default iOS app. It is worth the money, and y’all should get it.

Pocket – You can customize app to match your reading style

Feedly – A smart reader that connects you to the information