Home
Games
Puzzle
Threes – A tiny puzzle that grows on you 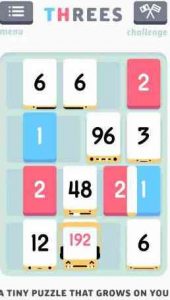 Threes is a tiny puzzle that grows on you. This is the ad-supported version.

It’s the kind of game that embosses the rules on your brain within 30 seconds, but then compels you to spend the next two hours playing. ~ Pocket Tactics

Explore our little game’s deep challenge and grow your mind beyond imagination. Optimized for iOS8 and human brains. Universal app for iPhone and iPads.

Honorably mentioned for Excellence in Design by the Independent Games Festival.

Threes grows with you and you’ll grow with Threes.

Ad scheme is not the right phrase. What I mean is that instead of intrusive pop up ads, you get so many plays when you download and then you can get 3 more plays in exchange for watching a 30 second ad. You get to choose when you do this and I have to say that I am far less annoyed by ads when they don’t hijack the game.

The game itself is fun and engaging for 10 or 15 minutes at a time. There don’t seem to be skill levels so I expect to grow tired of it. Perhaps that will be improved in an update but unless it is, I won’t pay for it. Nonetheless, the way ads are handled in the free version is something I wish all developers would do. I don’t even avert my eyes when I play an ad with this one! 4 stars for fun but limited challenge

I wish there was some way to get a running total. I don’t think that’s possible.

One hitch in the ‘night’ or ‘dark’ mode—when the screen on which you ‘sign’ your name arrives: PHOTON ALERT. Suddenly you have a much too bright screen.

If you’re playing in the dark, it’s painful. If you have a headache, sinus pressure behind your eyes, or are “merely” light sensitive, now’s not the time to play it.

I would really appreciate this being fixed.

I agree with another reviewer that choosing when to handle the necessary ads in the free version is a wonderful thing, because having to see around them is a nuisance.

Been playing this for at least three years.

Please fix the ads that make you watch for 30 seconds then won’t close so you can get your next three games credit. Truthfully, I don’t even mind watching the ads on this game because you get to play three games before having to watch another one I but this really makes me mad! I end up having to shut the game down—it’s the only way to get out of the frozen app. But once I shut it down it’s likely I will go on to do something else. Other than that one complaint, this game is really fun to play so I hope the developers can fix it.

This game is so much fun! It’s a great “think game” because it helps me take a brain break. But it also engages me, so I really enjoy spending time on it. It is so worth watching ads to get plays. You get ten minutes of fun for watching a thirty second ad! The game also gets more challenging as you move on, which is great. I also love the fact that every game starts at the same level, so it is about consistency, stamina, and planning ahead. Download this game if you want to have fun!

I love playing this game as a wind-down. I love that you opt to watch ads to get turns, rather than being bombarded with ads after every round or mid-play. I wish I could just buy the game, but for now I’m happy to play thirty second ads every three rounds.

Get Threes from App Store

What is your opinion about Threes