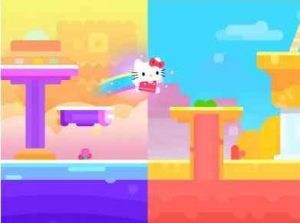 Meet Ari. He’s on a journey to rescue his sister, Ina, who has been kidnapped in the mysterious Phantom world. He’s determined. He’s focused. But super-scary enemies, super powers, allies and hidden secrets await him.
Game Features :
In Super Phantom Cat 2, you can possess the best Phantom superpowers yet:
Bounce higher and higher to reach for the sky and stars.
Float on balloons into the Wild Woods and Alps.
Break walls, stone, and metal.
Shrink and enlarge monsters with the touch of a finger.
Turn irritating critters into ice statues.
Shift to invincible mode if danger still prevails.

Play as one of many characters, such as:
The lead singer and guitarist of a band.
A dancer who plays pranks and dresses up as a skeleton.
A pink-haired magician who is a master of cards.
A funky teen skater obsessed with extreme sports.
An adventurous cowboy always on a lookout for treasure.
And champions from Mushroom stomping, Juice blending and Cuteness competitions.

Find hidden secrets in the mysterious Phantom World.
Discover different levels and checkpoints.
It’s a purr-iceless experience for everyone!

In Super Phantom Cat 2, you can own props, which save you from cata-astrophe. If cats have nine lives, you can earn even more!

Create props based on your own requirements. · Whether you are a beginner or a master at platform games, you need these props to complete your mission.

Save your progress across multiple devices. Mobiles, tablets, Apple TV — you can access Super Phantom Cat 2 from all of these locations.

From the creators of Super Phantom Cat, which featured in the App Store’s “Best of 2016,” Super Phantom Cat 2 is the hottest, baddest platform game of 2017.
We love to hear from our fans.
Email us with ideas and feedback: service[at]veewo.com
Like us on Facebook: www.facebook.com/veewosupercat/
Follow us on Twitter for latest updates: @VeewoGames and @SuperPhantomCat

Beautiful game, but some small problems

This game is incredible! And very fun, I love playing it every week or when I feel down, but I have a few problems.. 1: only 5 energy.. it’s kinda sad how I can only play 5 levels until the next 100 minutes or so, unless I watch 5 total drama episodes, which is a fun way to wait until I have enough energy! 2: loss of audio.. sometimes when I wanna hear that majestic music, all I hear is silence, no music, no sounds, that’s a real letdown, especially since that peaceful music won’t be able to calm my nerves.. 3: the gold chests, you can only open them by either watching an ad for a key or using a key you already had for some reason, it’s kinda sad since you might have hoped to get a perfect score on a certain level, but you’ll have to watch a 20 to 30 second ad for a key because you ran out of keys.. that is all the problems I have, I still rate this 5 stars because it’s very awesome, I don’t mind the problems much, but when I do, I get pretty upset, anyways, if you see this, I’ll be very happy! Although you may not, I don’t really know.. but I love your game! Hope you can add more levels or so, thank you, bye!

I don’t like most iOS games. I like simple ones that aren’t too addictive and that I can play in little bursts. I’ve been looking for a simple “Mario-style” game for a long time. This one is great! Easy to learn, and the the little secrets are attainable even for iOS game under-achievers like me. The gameplay and “feel” of it get 5 stars in my book. But after playing it for a week or two, I have to dock a star: When I reached the final level, nothing happened. It feels very incomplete. Even a little message like “Thanks for playing! We’re working on more levels!” would be a nice touch. I really do hope they release an update with more levels…and an ending!

UPDATE: We’ll, the original story still doesn’t have an ending (maybe they’re making it like series TV shows which never quite end in hopes that you’ll keep watching, or in this case playing…), but it’s nice to see the developer adding levels and making little improvements (like giving an achievement icon for finding all secrets and chests in a level, which has made going back through the levels fun to find secrets I may have missed!). It’s just a fun game. I’m giving back my 5th star.

Thank you for playing Super Phantom Cat 2, and your feedback. We love that you love the initial gameplay, mechanics and story. However we would continue to add more interesting chapters, levels, features and characters in the upcoming updates.

What is your opinion about Super Phantom Cat 2

Tacticool – Fight your foes in this intense 5v5 mobile shooter

Doodle Jump – Find out for yourself