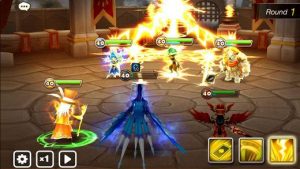 An action-packed fantasy RPG with over 70 million Summoners around the world!

Jump into the Sky Arena, a world under battle over the vital resource: Mana Crystals!
Summon over 1000 different types of monsters to compete for victory in the Sky Arena!

Assemble the greatest team of monsters for strategic victories!

Strategic Gameplay
Witness the dazzling display of each Monster’s unique skills!
21 different Rune sets to pick and choose additional abilities for your monsters!
Come up with the best strategy to win battles!

Massive Collection
Fire, Water, Wind, Light and Dark!
5 different attributes, and 1000 different monsters!
Collect as many monsters as you can and assemble the greatest team!

Dynamic Guild Battles
All for one!
Fierce battles of up to 25 people per guild!
Group up with your guild buddies to be the last guild standing!

Real-time Raid
Battle as a team!
A real-time battle with 3 users!
Defeat the boss with your fellow Summoners using various tactics!

Homunculus
The Forbidden Summoning Magic has finally been revealed!
You can Evolve the skill of your choice with this special Monster!
Summon Homunculus and show off your strategy!

Craft
You can Craft more than 100 items at the new Craft Building!
Craft High Runes, special Buildings, Statues and more with the new Craft System and install them wherever you want!

World Arena
Enjoy a real-time battle with users worldwide!
Experience a breathtaking battle that starts from Pick&Ban!
Reveal your unique strategy to the world!

Items are available for purchase in this game.
For Com2uS Mobile Game Terms of Service, visit
www.withhive.com.

For questions or customer support, please contact our Customer Support by visiting https://www.withhive.com/help/inquire

Most games like this involve a lot of waiting around and watching adds but this one doesn’t have adds at all and always has something new to do. There are always goals you can be working towards for high rewards. Not to mention the beautiful art, especially for an iPhone game. There’s such a large variety of well designed monsters that it makes you want to keep playing until you get them all.

Get Summoners War from App Store

What is your opinion about Summoners War