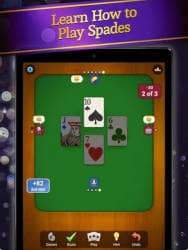 Play the BEST Spades card game on your iOS device, made by MobilityWare — the #1 card and parlor game developer!

Spades has a fresh new look on the App Store, featuring brand new goals for you to reach! We’ve also included clear tutorials to help you learn the game of spades at your own pace! Relax and train your brain as you compete in the game of Spades!

Spades adds a new element of strategy & puzzles to the classic card game space. Plan and strategize each move as you compete with a partner to try and out-bid and out-play your opponents. Win the most books and be the first to 250 points to win! Be careful though, spades can’t be played until they are broken! Precision, strategy and quick thinking are needed to master the game!

Take on several groups of players as you work your way through the ranks!
Learn advanced gameplay techniques as opponent’s skill increase alongside yours
Perfect your game and earn new rewards as you go!

Play the fun and relaxing version of Spades

Hop into the classic spades gameplay you know and love, available when you want it
learn the game of spades in a low pressure, easy to learn, simple environment!
Drop in drop out gameplay means spades is ready to play whenever you are!
Use expressive emojis to let your opponent know you are winning big!
Play offline – bots are available to play whenever and wherever
Need help? Use the unlimited hints and undo to find a path through the challenging competitive card game!

The classic Spades game, for beginners and Pros alike

Over 300 titles to earn and collect!
Track your high scores across several games
Push for a new personal best with each hand of classic cards you play!
Improve your play with deep statistics. Watch as you improve your strategy through each game!

Play Spades how you want to

Choose the difficulty of the AI and the rules of the game!
Choose either portrait or landscape to play
Never lose a game with save states, even when the app closes!
Add in sandbags or jump into hard mode for even more challenge!

Train your brain with classic competitive gameplay and challenges

For beginners and pros alike! Learn to master the game of spades or master your high-level strategy with each game!
Instructions are included in the app. Use them to build the basis of your Spades strategy, both in game and with your friends!
Sharpen your skills with offline play! Track your stats in the app and watch as your game improves!

I never leave reviews but the developer for this app knocked it out of the park with this game, along with other apps I have installed by them as well. I have played several different spades apps all by different developers and this one is definitely on top for many reasons. First and most impressive are the ads, I hate ads but in order for games to be free I get that they’re necessary. There are so little ads in their apps, they never interrupt gameplay, and are always less than 10 or 15 seconds long. Super impressed with that. Second, the interface is super easy to look at it so it doesn’t have any distractions or other stuff to look at that’s unnecessary like other apps do and everything is bold, highlighted during your turn, they even highlight the current winning card. I don’t have the best eyesight so easy to look at and follow is really important to me. Third, a ton of other spades apps don’t really emphasize teams or their bots don’t really play along like a real life game of spades but they do in this game! You never have to worry about your teammate trying to beat your already bid winning card, and if they do it gives you a quick brief explanation as to why they had to. This would also be a great game to play if you’re trying to learn how to play spades, I’m not sure if it’s the right way but the exact gameplay in this is exactly how I originally learned how to play spades before smartphones were ever a thing.

The game is really a lot of fun even though it’s kind of rigged, if my team bids NIL, the other team knows exactly what cards to play to set us, but it’s almost impossible to set their NIL.

The rules I learned to play by states that when a NIL is played, the player bidding the NIL gets to pass their 3 best cards, and their teammate passes 3 cards back, also, when a team bids 10 tricks, they receive 200 points.

It would be really great if the rules of play could be adjusted to make the game more official.

Thank you and I hope to see the changes in the game.

Hi there, our team is always looking for new ways to improve our games, so we really appreciate you taking the time to write us a review! Please don’t hesitate to Contact Us through the in-game Support page if you have any additional feedback you’d like to share with us!

Get Spades Card from App Store

What is your opinion about Spades Card

Gin Rummy Classic – Victory is both challenging and rewarding