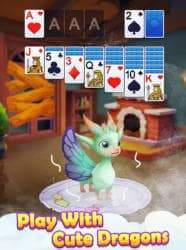 Solitaire Dragons will take you to the magical world of the medieval island. You could play with the witch to go on adventures and encounter various kinds of dragons in the world of sword and magic. What’s more, you could create your paradise by collecting dozens of dragons there, for instance, torridity, foliage, aster, lava dragon, obsidian dragon, etc. It is not merely a solitaire game that makes your brain smart and active, but also a challenge for you to know more about the dragon and get along well with them in the game. Come with the witch and try the FREE solitaire game NOW!

CREATIVE SOLITAIRE GAME
Based on the classic solitaire game (also known as Patience or Klondike), we’ve added a CREATIVE dragon world with different Medieval Creatures for you.

UNEXPECTED SURPRISE IN DRAGON EGGS
Whenever you get a new dragon egg, you don’t know what the dragon inside is. Let the witch use magic to speed up hatching. Get more kinds of dragons from dragon eggs!

DELICATELY DESIGNED THEMES
Put your hatched dragons into the Dragon Island and let them grow up naturally, they will provide you with magic to purify the lifeless habitat, so you can decorate the Dragon Island more beautifully!

THOUSANDS OF CHALLENGES
Together with Daily Challenges, there are over tens of thousands of classic solitaire challenges for you to play anytime and anywhere!

I really like that with this app you can play really really quickly unlike other apps and because there’s a timer option, a cool suggestion would be earning different amounts of coins depending on how quickly you finish a game! just so it’s not as repetitive and gives a sense of competition 🙂 plus beating your own high score is something to look forward to

Thanks for your suggestion. Your feedback will be sent to our relevent team. We will continuously improve the gaming experience in later versions. What’s more, we’re looking forward to your continued support.

Love that there are almost no restrictions on play time or tries- unlike some puzzle games, there are no “lives” that you can lose from failing a “level”, and there’s no timer on how many deals you can play. If I wanted to, I could play 24/7, which is nice since I hate apps that try to get you to pay for time to play.

Levels are extremely easy, but just challenging enough that it keeps you interested. I haven’t been unable to complete one yet, but if you do want to restart you can at no cost. The most fun part is trying to beat your last time.

The dragons are very cute and incentivize you to keep playing, but they’re also not a huge part of the game so you could honestly just play solitaire and ignore the dragons. I would like the dragons to be more expanded upon, like a mix of Dragonvale and solitaire.

Very few ads! Love that. You can play several games without experiencing one ad, and when they do appear it’s not in the middle of a game. Plenty of options to earn coins through ads though, so I’d gladly choose to see an advertisement for some extra currency.

No complaints! Anyone who wants an easy game to fiddle with should download this.

This is a great game, and very underrated!( This is coming from a 13 yo. so you’ve gotta believe me 😉 ) There’s very few adds, and great graphics! A few suggestions that I think would make the game a lot funner. More dragons, and a way to name your dragons. A dragon evolving system (baby -> teen -> adult) where you can age up dragons with coins you earn, or possibly a whole other point system where you can earn coins ALONG with evolution tokens or something by playing/winning games. This is a great game tho, and I have no complaints! Keep up the great work, devs!

Thanks for your suggestion. Your feedback will be sent to our relevent team. We will continuously improve the gaming experience in later versions. What’s more, we’re looking forward to your continued support.

Get Solitaire Dragons from App Store

What is your opinion about Solitaire Dragons

Hearthstone – Pick up your cards and throw down the gauntlet

Guess Word – Play with any size group of friends