Home
Games
Sports
PKTBALL – Fight your way through the leaderboard 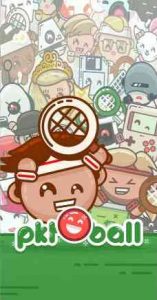 Prepare to smash it! A hyper-charged arcade smash sport designed to test your skills and reflexes to the max. Fight your way through the leaderboard and become a PKTBALL master!

Collect dozens of awesome PKTBUDDIES, featuring DotBoy the retro console, Brains the zombie, Mixtape the vintage cassette and many more. Each PKTBUDDY comes complete with a new court and unique soundtrack, and special guest PKTBUDDIES include PUK, ALONE, HOPIKO as well as other exciting characters!

Play daily challenges, grab coins and try your luck on the PKTGRABBER mini-game. Find your perfect PKTBUDDY and break through to the top of the leaderboard!

Keep ahead of your friends and check your ranks on the global leaderboard, or challenge them head-to-head in a local multiplayer game. Up to four players can battle it out on a single phone or tablet.

A network connection is required for new characters and courts.

Smash your way through the exciting endless arcade mode

Earn coins to play the PKTGRABBER mini-game, then use your skills to claim new PKTBUDDIES

Compete for the best high score and make your mark on the global, friend and daily leaderboards

Fill your trophy cabinet with over 20 PKTBUDDIES, each with their own themed court and soundtrack

Try multiplayer with up to 4 friends around one device.

PKTBALL is a universal game app, compatible with most iPhone and iPad models.
For best performance we recommend iPhone 5 or later.

HEADS UP: PKTBALL is free to download and play, however characters can be purchased with real money. If you prefer not to use this feature, just disable in-app purchases in your device settings (Settings > General > Restrictions).

This game is soooo good! I paid to get the ads removed and just to support the developers because it’s just perfect! Now my suggestion is that maybe you guys should add a pause button and when its resumed it should have a small countdown(3..2..1) cause sometimes it gets very intense and sometimes I have to stop playing and out of nowhere they score cause the game keeps running! The other thing is that all the characters are awesome but in the pro tour when you defeat evil jake and he evolves that character is AWESOME!!!! I have no clue if you can unlock him or not but if not you guys should definitely add him to the list of characters and make different bosses as well! Keep up the good work guys!!

Thanks for the suggestions! We actually have a pause button that does exactly that in the normal mode of the game. We’ll have to add it into protour mode.

You’re the first person to mention the “secret” character. Let’s just say, if you defeat him 5 times, your wish may come true

I forgot about this game for a while and I got a new phone so when I got back on and a “Limited Time Offer” popped up I’m like Okay yeah I’ll support this game. But I hadn’t visited the Pktgrabber yet, and when I did after purchasing it was different and bad. Mystery capsules instead of characters and you had to keep the first one and it said “New!” but didn’t unlock anything. But luckily it must have been glitching out because this update fixed it! I blew a bunch of coins on the bad one testing it but I’m so relieved it’s back to normal that I don’t care! This game is great and I can’t wait to unlock all the skins (and eventually crowns maybe??) even if I’ll never get the secret character or even win Protour mode because I never “Continue?” and my all time high score is like… 165. Great game!

Oh god. This game is weird. But in a good way. First, the gameplay is well tuned and feels amazing (I’m an indie game designer, so I should know) and feels like PONG super smash bros. The sounds and characters, though… unbelievable. Each character is obviously inspired by geek/90’s culture (PONG paddle or Ms-DOS, anyone?) and each re-themes the game. There is a freakin’ incredible soundtrack, amazingly geeky SFX(the shield power up deactivating plays the PORTAL 2 cube placed noise) and is incredible… my only question is why is this not on steam??? Because it’s THAT good… Fyi though the character crane drains your coins if you leave, which is not nice

GEt PKTBALL from App Store

What is your opinion about PKTBALL

Touchgrind BMX 2 – Riding through dazzling locations around the globe

Darts of Fury – Made for darts newcomers and fans alike