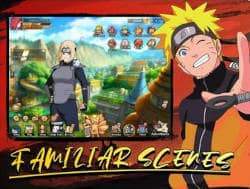 The Battles Are Most Breathtaking
Ninja Battles are just taps away, with iconic Ninja Skills reproduced in the game. Master your Ninjas and crush your enemies!

A Wise Lineup Makes A World of Difference
In here, you can give full play to your talents and wisdom by deploying your defensive and offensive lineups against foreign invasion.

Make Your Characters Look Sharper
You are the master of your Ninjas! Try and match them with different skills and stats. It’s time to shine!

It starts to promote pay to play once you get to a certain point due to lack of level. While it does have decent small priced promos it’s never really worth while. On the other hand the promos that would be a great help like an UR madara cost 150 and that’s if you want it at the base stars. So the only players are super rich who just were able to put hundreds into the game which leave its with a limited player base that is almost all on the stronger side.

So the reason why is because I was playing a other game and I had deleted it so like I think a couple weeks or so o had see a other game that was just like the other game so I think it changed or someone had stole the entire game so that is the reason.

I love this game but

I love this game but it takes a long time to get used to and summoning I summon a lot and I summoned 20 and got all blues and grays. All the reviews with it cost money are partly correct and it is easier to level up and get better players but you don’t have to spend money to get good

I really LIKED this game

I played this game a lot. But my account vanished and I lost everything. I almost had all of the shippuden characters maxed out and I was at level 60. If this doesn’t get fixed I will never play this again

I liked it buuuut

This game is cool because I was playing it for like 20th time and I think it’s amazing but don’t add to many because I got confused with my people.

Awesome game and I’m not a bot btw

Get Legend of Final Valley from App Store

What is your opinion about Legend of Final Valley

Guess Word – Play with any size group of friends

Hearts – Start having lots of fun

Phobies – Challenge you in an asynchronous battle and arena