Home
Games
Adventure
DEAD TRIGGER 2 – Get ready for the assault 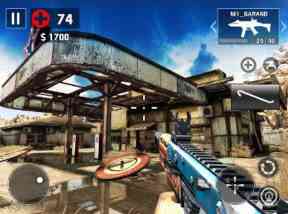 Over 100 Million downloads
Award-winning Non-Stop FPS Action Zombie Shooter
Get ready for the assault: It is time for you to rise up and fight for your survival in a zombie apocalypse in this heart-stopping First Person Shooter (FPS) adventure!

Build your personal Hideout and meet the Gunsmith, Scientist, Smuggler, Medic, and Engineer.
Unlock 10 regions and plan a strategy for 33 different battlefields. Save the world!
More than 600 gameplay war scenarios and intensive storytelling campaigns.
More than 70 types of gun weapons. It was never so easy to kill Zombies!

Wipe out the zombie hordes in a variety of imaginative ways. This Zombie FPS shooter is full of evil action!

Every week new Tournaments in the beautiful Arenas. Kills Zombies with style.

At MADFINGER Games we’ve always challenged ourselves to push the boundaries on mobile devices, and we’re proud of our console quality FPS shooter games. From cutting edge graphics to our precise FPS control system, over 240 million players worldwide have been blown away by our innovative approach and dedication to quality. We are the best developer who is developing FPS action shooting games for mobile since 2010.

I played the first dead trigger and was very impressed and the sequel is twice as entertaining. But I feel like that there needs to be changes within the games. For the China region the first mission is “hi shanghai” I get the pun but Shanghai is like on the other side of China compared to where the mission is. Next thing is the in-game currency balance. It seems like after a mission my money is already gone. For beginners you really have to save up to flourish in the game. After a mission I need to upgrade my guns (which can cost fortunes) because the virus is mutating faster than Usain Bolt. I like the game to actually reward a little more to the player for them to actually catch up. One other thing is weapons. There’s is definitely more cooler weapons and a bigger variety compared to the last game, however blueprints is not given at a quantity you expect. You can only get blue prints by killing elite zombies and you can only get one out of the whole mission (sometimes you can get two) I understand the developers trying to balance the whole thing out, but it just takes too long. After you complete a campaign mission ,which always drops you a blue print, it takes like 10min to unlock the next mission. You eventually put it off because our attention span is like a bird. What I suggests is that the game gives players chance to play missions that allows them to get blueprints.

Or even to crates that you open by using gold or daily reward.

Fun, but needs work in a few areas

This game is very fun and entertaining, and there’s a lot to do. But there’s also a lot missing. I, for one, would very much like to see NPC interactions besides defense missions (i.e. talking to each other via comms, or maybe even a first person hideout). Also, weapons are very annoying to get. In my previous two accounts, I had already beaten Africa by the time I found my THIRD Ithaca blueprint. Character customization could be a huge opportunity to do what a lot of other games don’t. Even if it’s just hair, skin, and gender, it’s still adds a new level of originality and personality to each player. I definitely think this game could also benefit from an armor system. Adding in helmets and pads could add a new grind to the game (and possibly another opportunity for in-app purchases) and players could finally stylize their character. Finally (and I’m not sure if they did add this, as I just made a new account), there should be some sort of clan system. Some sort of group within the game where you can organize and execute special missions and unlock powerful weapons and gear. You could also have 2-3 clan mates in the Arena at a time, which could lead to higher rounds and higher rewards, along with teamwork skills and possible new opportunities for lower players. Don’t get me wrong, I love the game, but I don’t love the repetitive and isolated feel of it.

Get DEAD TRIGGER 2 from App Store

What is your opinion about DEAD TRIGGER 2

Crash Bandicoot – Get ready for the run of a lifetime