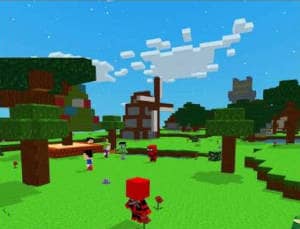 Game Description :
Build your creative world you want with Block Craft
You will join wonder world with many beauty scenes in Block Craft.
Do you an io and building game fan? Do you like arcade action game and simulation game?Have you ever played minicraft games? Block Craft World is a new fun game and relaxing game that you don’t wanna miss and you can creative your world which can’t make in real.

Block Craft World – the fascinating combination of smasher io game and gamecube. In this free fighting game, you will play as a craftsman gunner and join in battle arena. You will be fully equipped with weapons such as hammer, gun, sword, knife. Your mission is so simple: Smash them all!

You must destroy dwarf and the more dwarfs you kill by weapon, the bigger and stronger you become. Exploring endless funny moments in offline game by using your crafting hammer to smash others and don’t get hit or slither. When you win the blockworld battlefield, you can become the last survival masterscraft.

Moreover, there are two modes minigame of creation and survival in the offline game. Block Craft World is a sandbox crafting build game which will help you make your dream comes true. You will craft and explore the adventure blockworld, seek resources, sandbox, block craft and build great world. You can gather different resources as earth, stone, wood or open ark…and building a world with exciting multicraft to craft block and survive in the adventure smash io game.

Awesome 3D gamecube graphics
Simple and funny io smasher game
Many blocks and sandboxes in this relaxing game
Enter the war and fighting with enemy in survival mode
Easy to control io game
Build your world with many block in game
Download BLOCK CRAFT WORLD now for free!!!

Why are the people so slow

Dragon takes too long to load

So, you know about the dragon, right? Well the dragon is cool in all, but why is he so expensive, huh! it takes 6 Hours really?! But everything els is cool, but why the dragon really a hour dragon, like does anyone no test that!

Omg I started playing 5 hours ago and cannot stop! Literally this has to be one of the most addicting games in history tysm for making this

It’s a good game but

this game is amazing i may love this game more than minecraft that game is 6.99 but this one is free and better !!

I love this game it’s really fun but please lower the ads down. But I still have a five star. Awesome game!!!!!

What is your opinion about Block Craft World